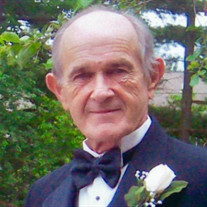 Richard M. Orleans, 76, of Nashua, died Monday, February 27, 2017 at his home following a period of declining health. He was born August 25, 1940 in Newton, MA, son of the late Marcel A. and Rose Ann (McGuirl) Orleans. He was also predeceased by a son, Richard W. Orleans, as well as by two brothers, M. Charles Orleans and Robert W. Orleans. He was also predeceased by a son in law, Ronald Gagne. He was the husband of Mary C. (Rocha) Orleans of Nashua with whom he shared 56 years of marriage. Richard served his country honorably by enlisting in the United States Coast Guard. He was a Master Plumber, working for several years with Elston & Sons in Lowell, MA, before starting his own company, R M Orleans & Sons Plumbing & Heating. Richard was proudly self employed for over 40 years. He enjoyed spending time with his children and grandchildren. Whether in the role of a Scout Master or coaching in the Cal Ripken League, Richard took great pride in being with his children and grand children. He was a blue ribbon winner for his home made maple syrup and jams at the NH fairs. Richard was an avid outdoorsman, enjoying camping, fishing, and hunting. He also enjoyed gardening and bowling. Besides his devoted wife Mary, his loving family includes one son and three daughters; James B. Orleans of Hudson, Deborah A. Orleans of Dandridge, TN, Lori J. (Orleans) Sliz of Nashua, Patricia L. (Orleans) Osterman and her husband Mark of Nashua, 11 grandchildren, Christopher Miller, Amanda Miller, Katherine Miller, Zachary Miller, Branden Orleans, Brianna Orleans, Michael Sliz, Matthew Sliz, Amy Long, Adam Long, Aaron Long, two brothers, Edward A. Orleans and his wife Lena and John “David” Orleans and his wife Charlotte, all of Merrimack, NH, two sisters, Dorothy Levesque and her husband Gerard of Nashua, Helen Nichols and her husband James of Hudson, a very special nephew, Stephen Z. Andrews of Nashua, two brothers in law, Anthony J. Rocha and his wife Marilyn of Maine, Gerald Rocha and his wife Robin of Florida, one sister in law, Carol LeClair of Dunbarton, NH, as well as many nieces, nephews, and cousins. Also, his three lovable cats, Marty, Scooter, and Gary. Visiting hours will be held on Friday, March 3rd from 4pm - 8pm in the DUMONT-SULLIVAN FUNERAL HOME, 50 FERRY ST. IN HUDSON. A funeral mass will be celebrated on Saturday, March 4th at 10am in Immaculate Conception Parish, 216 East Dunstable Road in Nashua. All may meet at the funeral home at 9am to follow in procession to the church. Following cremation, burial will be held at a later date. In lieu of flowers, the family requests donations be made in Richard’s loving memory to the St. Jude Children’s Research Hospital at www.stjude.org

Richard M. Orleans, 76, of Nashua, died Monday, February 27, 2017 at his home following a period of declining health. He was born August 25, 1940 in Newton, MA, son of the late Marcel A. and Rose Ann (McGuirl) Orleans. He was also predeceased... View Obituary & Service Information

The family of Richard M. Orleans created this Life Tributes page to make it easy to share your memories.