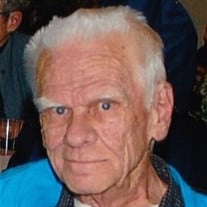 Richard "Dick" Paul O'Leary, 82, of Nashua, NH passed into eternal life on February 15, 2018.   He was born in Pittsburgh, Pennsylvania, to Thomas and Elizabeth "Bessie" O'Leary on January 18, 1936, the youngest of ten children. He was raised in Pittsburgh and attended Central Catholic High School. Richard joined the United States Army in 1955 and was stationed in Germany, before being honorably discharged in 1958. He then attended and graduated from Penn Technical Institute in Pittsburgh. Richard married Patricia Sperling of Pittsburgh on June 16, 1962 in Oklahoma City, OK.   He started work as an electronics technician with the Federal Aviation Administration in April 1962. His career with the FAA brought him initially to Fairbanks and Galena, Alaska, then to Elmira, New York, then Houlton, Maine, and finally to Nashua, where he retired in 1997.   He served in several volunteer leadership roles with the Boy Scouts of America and was recognized with the Silver Beaver award by BSA’s Katahdin Area Council. He also served as a youth baseball coach.   He was a communicant at Immaculate Conception Parish in Nashua where he served on the building committee for the new church. He was a member of the Knights of Columbus.   Richard was preceded in death by his son, Daniel, brothers Thomas, James, and William, and sisters Helen Sheehan, Henrietta Robbins, Dorothy Riley, and Elizabeth Konrad.   Richard is survived by Patricia, his wife of fifty-five years, daughter Debra of San Francisco, California, son David and daughter-in-law Lisa of Springfield, Massachusetts, sister Patricia Wells, brother John "Jack", sister-in-law Mary, sister-in-law Claire, and many nieces and nephews.   Funeral services will be held at 10 a.m. on Thursday, February 22 at the Immaculate Conception Catholic Church in Nashua. Burial will be private. Contributions in lieu of flowers may be sent to the Immaculate Conception Building Fund, 216 East Dunstable Rd. Nashua, NH 03062.

The family of Richard O'Leary created this Life Tributes page to make it easy to share your memories.