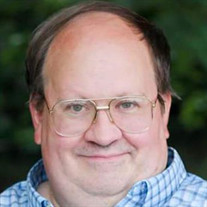 Richard Quimby Kahler, 63, of Merrimack N.H, died May 13, 2016 of kidney failure following a long illness. He died surrounded by his wife and children at Crestwood Nursing Home in Milford, NH where he had been a resident since January 2012 Richard was born November 4, 1952 in Los Angeles, California to Dr. Rosemary Shoemaker Kahler and Dr. James Elias Kahler. He was the fourth of five children. His sibling are: Mary Harlean Kahler Smith, Elizabeth Ann Kahler Cubberly, Dr. John Gilman Kahler, Rev. Jerome Evans Kahler and Dr. Robert James Kahler Richard grew up in Los Angeles, California where he attended Los Angeles High School. At the age of 16 he began his studies at Stanford University in Palo Alto, CA. While attending Stanford he had the opportunity to study abroad at Stanford France. Following College he was employed by Stanford University as a Computer Programmer Specialist until he moved to Broken Arrow, Oklahoma in 1978 to work for Honeywell Bull World Wide Information Systems as a Senior Systems Analyst. Throughout his life he received numerous awards, including being selected at the age of 17 by the City of Los Angeles to be the first recipient of the distinguished “Fletcher Bowron Citizenship Award” because of his outstanding qualities and fine record as a citizen of Los Angeles. Richard Married Jenette Hoop, the love of his life 39 years ago on May 20th 1977 in Vallejo California. They became engaged after only 3 weeks and were married 3 months later. In May of 1979 they went to the Mesa Arizona Temple where they were sealed together for time and all eternity. As observed by family and friends, he has continued to court her daily. He called her the love of his life and always referred to her as “My Eternal Sweetheart”. They have Five Children: Marlena Kaye Kahler, Deborah Marie Kahler Shea, Joseph Shoemaker Kahler, Matthew Elias Kahler, and Mary Rebecca Kahler Goes, 16 Grandchildren and 4 Great Grandchildren and many nieces and nephews. He was preceded in death by his sister Mary Harlean Kahler Smith and both Parents Places he lived throughout his life include: Los Angeles, Palo Alto, San Jose, CA. Also Six months in France while at Stanford Univ, Broken Arrow, OK, and Merrimack, NH Richard will be remembered as an avid Genealogist and with a lifelong interest in astronomy. He could name every star, planet and constellation, and loved teaching about it in frequent stargazing activities with family. This will always be a special family memory and tradition carried on by his children and Grandchildren. Richard served in his church, The Church of Jesus Christ of Latter Day Saints, in many capacities including, teaching Sunday school, Primary, Gospel Doctrine, Elders Quorum and as a Seminary teacher. He loved teaching. He has been referred to by many as having a gift for teaching and being a ‘Master Storyteller’ as he made what he was teaching come to life, almost as if he were there. He worked in the Scouting Program, Genealogy Program and other areas where needed. He served in various clerk positions including ward clerk, membership clerk, financial clerk, and executive secretary to the Bishop. He was extremely particular to detail. He was a faithful home teacher and he sincerely loved and cared about those he visited. He enjoyed attending the temple. Very special to him was his opportunity to serve as a Temple Worker in the Boston Massachusetts Temple. Other things he enjoyed: being in nature, autumn mountain walks with family and singing. His performance of “If I were a Rich Man” from “Fiddler on the Roof” was requested often and he left those listening smiling and clapping and singing along. He was in a barber shop quartet at one time. He also enjoyed singing songs from Handel’s Messiah. “Refiner’s Fire” was another often requested for him to sing. He was a very good dancer. He taught Israeli Folk Dancing. He danced with and sang to his sweet Jenny often and would always bow with outstretched arms as her asked her to dance. He was involved in the Boy Scouts of America where he achieved the rank of an Eagle Scout, and later served as a cub master. He always enjoyed playing board games with his family, spending time at the park with his kids and grandkids, reading the scriptures and sharing bible stories with them. He loved being a father and grandfather more than anything. He will be greatly missed. He was blessed with a gift of reaching out to others to lend a helping hand on many levels throughout his life and even more recently, though his own health was failing, he served others at the nursing home. The many stories we are hearing from friends, nurses and staff at the nursing home and others are inspiring to all who knew him. He served others by reading to someone who was blind, reassuring those with anxiety and by helping to bring peace, strength and calmness to those around him, being a friend and positive influence. And always thanking the nurses for all they did to care for him was very important. Above all was his deep faith in the Lord. He worked tirelessly at being close to his Heavenly Father and Jesus Christ, loving his wife and family and making sure they knew that they were a blessing in his life.

Richard Quimby Kahler, 63, of Merrimack N.H, died May 13, 2016 of kidney failure following a long illness. He died surrounded by his wife and children at Crestwood Nursing Home in Milford, NH where he had been a resident since January 2012... View Obituary & Service Information

The family of Richard Q. Kahler created this Life Tributes page to make it easy to share your memories.