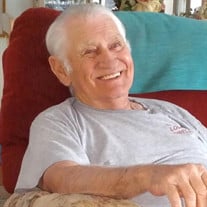 Richard J.R. Gauthier 85, passed away peacefully surrounded by his family on Saturday June 18, 2022. He was born in Dracut, MA on March 11, 1937, the son of the late Rosaire and Claire Gauthier. His first job was at 11 years old as paperboy and soon meeting 11 year old papergirl, Claire Tessier, the love of his life. Richard married Claire at 16, and they were married for 68 yrs. Together, Richard and Claire had 5 Children: Gloria Gauthier, (Predeceased in 1972), Ellen Gauthier Lee, Charlene Gauthier, Richard Gauthier and Michael Gauthier. Dick was father-in-law to Michael Lee and Kris Gauthier. His brothers were: Raymond Gauthier (previously deceased 1982) , Norman Gauthier and his sister Ruth George. He had 7 grandchildren and 8 great grandchildren, several sister-in-laws and brother-in-laws, nieces and nephews. Dick was a proud member of Laborers Union Local 429. He worked many years as a foreman for Demartio Construction, JF White and several other companies building our interstate highway system along with other area construction projects. Winter would bring construction job lay-offs. Dick would pick up various jobs such as building houses or reupholstering kitchen chairs to make ends meet. After almost 40 years in construction Dick began a second career working in grounds and janitorial work for the Hudson and Litchfield School Districts. He Loved the game of baseball and played with various teams in his younger years becoming an avid fan of the Boston Red Sox. He also would tell Alexa to play his favorite artist, Johnny Cash, while outside on the back deck enjoying his favorite beverage. He will be remembered as a loving husband, father, grandfather and a hard working man of many talents, always willing to lend a hand. If you would like to make a donation in Richard’s name, his lifelong charities were either St Jude Research Hospital at www.stjude.org or Dana Farber Cancer Institute at www.dana-farber.org A funeral Mass will be celebrated on Thursday June 30, 2022 at 11:00am in St. Kathryn Church, 4 Dracut Rd, Hudson NH 03051. Family and Friends are invited to the church basement to gather for food and refreshments after Mass where we will celebrate Richard’s life.

Richard J.R. Gauthier 85, passed away peacefully surrounded by his family on Saturday June 18, 2022. He was born in Dracut, MA on March 11, 1937, the son of the late Rosaire and Claire Gauthier. His first job was at 11 years old as paperboy... View Obituary & Service Information

The family of Richard J.R. Gauthier created this Life Tributes page to make it easy to share your memories.