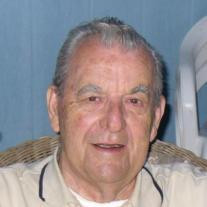 Richard Abbot Byron, Sr., 79 of Hudson, died Thursday October 4, 2012 at his residence surrounded by his loving family. He was born December 18, 1932 in Arlington, MA son of the late Samuel and Catherine (Turnbull) Byron. He was also predeceased by a sister, Katherine Nichol. Richard was the husband of Ruth (Lingley) Byron of Hudson. He was a Sergeant in the United States Marine Corps and a Veteran of the Korean War. Richard later became a police officer for Tufts University, where he retired after over 20 years of service. He was a member of the VFW Post 5791 of Hudson as well as the American Legion Post 48 of Hudson. In his earlier years, Richard was an active member with both the Elks and the Masons. Richard also loved watching any and all sports on t.v.. Besides his loving wife Ruth, survivors include three sons and a daughter; Richard Byron Jr. and his wife Anna of Florida, Edward Byron, Sr. of Arkansas, William Byron and his wife Beverlie of Canterbury, NH, Cheryl Zduniak and her husband Jeffrey of Hudson. As well as two brothers Thomas Byron, Sr. of Pelham, Daniel Byron and his wife Ellie of Florida. Nine grandchildren, Richard III, Raven, Nicole, Edward, Jr., Brittany, Somer, William, Jr., Timothy “Joey”, Jasper, Five great grandchildren, Amaya, Lily, William III, Bobby III, and Zavier-Kevan. As well as many nieces, nephews, and cousins. Visiting Hours will be held on Sunday Oct. 7th from 2-4pm in THE DUMONT-SULLIVAN FUNERAL HOME, 50 FERRY ST IN HUDSON. A Graveside service will be held on Mon. Oct. 8th at 1pm at the NH State Veteran Cemetery, 110 Daniel Webster Hwy, Boscawen, NH. All May Meet At The Cemetery. In lieu of flowers the family encourages donations be made in Richard’s loving memory to Building Dreams For Marines, 64 Harvey Road, Suite 107, Londonderry, NH 03053 or www.buildingdreamsformarines.com.

Richard Abbot Byron, Sr., 79 of Hudson, died Thursday October 4, 2012 at his residence surrounded by his loving family. He was born December 18, 1932 in Arlington, MA son of the late Samuel and Catherine (Turnbull) Byron. He was also predeceased... View Obituary & Service Information

The family of Richard Byron, Sr. created this Life Tributes page to make it easy to share your memories.