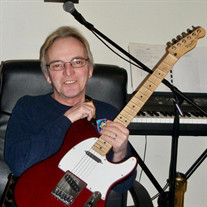 Rene A. Beaudoin, 63, of Raymond, NH and formerly of Hudson, NH, died Monday, June 21, 2021, of Congestive Heart Failure, Cardiomyopathy and was being treated for lung cancer. He was born November 10, 1957 in Lac Megantic, Quebec, Canada, son of Renette (Duquette) Beaudoin of Nashua, NH and the late Laurent A. Beaudoin, who died in 2007. Rene was also predeceased by his sister, Lynn (Beaudoin) Burtsell in 2019. Rene was the husband of Francine (Plante) Beaudoin of Raymond, with whom he shared 13 years of marriage. Rene was employed as a Drywall finisher prior to an early retirement due to a disability. He was an avid musician and played in multiple bands during his teenage and adult life, D Street Dues Band, Springfield Mills, Rockaholix and The RYM, to name a few. Rene loved to snowmobile in the winter and enjoyed camping and fishing in the summer. He will be greatly missed by all who knew him. Besides his loving wife, Francine, Rene is survived by a son, Christopher Beaudoin of Arizona, a daughter, Amy L. Beaudoin her fiancé Kevin Soper, a grandson Aaron M. Beaudoin, all of Manchester a brother Yves A. Beaudoin and sister-in-law Karlene (Potter) Beaudoin of Litchfield, brothers in law Todd Burtsell of Nashua, Robert Plante and his wife Michelle (Moreau) of Nashua, and Anthony G. Vlatas, a sister-in-law Diane “Dee” (Plante) Vlatas of Gilford NH, four nieces, Jennifer Beaudoin Morani of Litchfield, Amanda Beaudoin Weaver of Hudson, Olivia Burtsell of Nashua, Aubrey Plante,two nephews, George and Thomas Vlatas, three stepsons, Derrick, Craig and Alex Babinski of Hudson, a mother-in-law Annette Plante of Hudson and six great nephews, Patrick, Austin and Tyler Weaver, Cameron and Nathan Morani and Jameson Plante. A Celebration of Life will be held on Friday, July 16th from 4pm - 9pm at the White Birch, 222 Central Street in Hudson. All family and friends are welcome.

Rene A. Beaudoin, 63, of Raymond, NH and formerly of Hudson, NH, died Monday, June 21, 2021, of Congestive Heart Failure, Cardiomyopathy and was being treated for lung cancer. He was born November 10, 1957 in Lac Megantic, Quebec, Canada, son... View Obituary & Service Information

The family of Rene Beaudoin created this Life Tributes page to make it easy to share your memories.