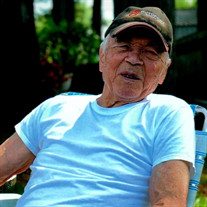 After a long and self--described “good life” Raymond George Ellis, Sr has earned his wings. Born in New York City on November 28, 1925 his parents wisely decided to move back to New England and settled in Hudson, NH where they raised eight children. Their second child, Ray, lived in Hudson until he married his sweetheart from Nashua, Claire Theresa Dumont on May 21, 1949. He attended local schools until he joined the service in 1942 at age 17 during World War II and proudly served his country in the US Army Air Force as a B-17 radio operator/gunner. Fortunately for his family (and future children) he was never deployed overseas. He was honorably discharged with the rank of corporal in 1946. After the war he pursued his love of flying earning a private flying license and happily piloted his favorite plane: the Piper Cub. After his marriage Ray attended Franklin Technical Institute in Boston studying to become an electrician. He graduated and was eventually employed by the former Improved Machinery Company (now Ingersoll Rand) in Nashua. For thirty seven years he worked there as an electrician and in other positions. He retired in 1988. He continued to work at various jobs until his wife became seriously ill. He left work to take care of her until her death in 2001 after fifty-two years of marriage. Claire would always be “his girl”. Idleness didn't suit Ray and he returned to work as a parts delivery man at Autoparts International in Nashua proudly noting that he was “their only stick shift driver” He continued to work there for ten years retiring for the second time in 2018 at the age of ninety two. In his spare time (yes, he did have spare time!) he enjoyed the company of his beloved wife, Claire taking many day trips around New England and visiting relatives around the US. He loved puttering around the house and in his yard up until his final illness even leaving projects now unfinished. He also had a lifelong love of cars and airplanes especially “War Birds” and would attend air shows whenever possible with his equally excited kids in tow. He was a man who loved and respected Nature. He fed “his” birds every day no matter the weather. He grieved when a tree was cut down as he believed that all living things had spirit. He cried whenever he had to bury any small animal found dead in the yard. but understood that our resident Mother Fox had to feed her kits as part of the way Nature worked. He loved all of his pets and through his life he had many. He is currently survived by his two cats: his beloved Roslyn, who always slept right by her Dad and Rossi’s brother Jackson, The “other” man of the house. Ray is survived by his daughter, Diane Ellis of Nashua as well as by his son, Raymond Ellis, Jr., and his wife Marie of New Hampton, NH. He is also survived by his two youngest siblings: Jeanne Dupuis of Florida and Paul and his wife, Sandy also of Florida. He was everyone’s favorite uncle and will be missed by his many nieces and nephews and his wonderful cousins in Maine. He was a popular guy with his co-workers and his many friends and neighbors. He leaves behind many warm memories for many people. He will be greatly missed. As a last thought I’d like to share this story. Not even a week before he took ill Dad and I were sitting in the back yard watching a hawk soaring on the currents. Dad turned to me and pointing up at the hawk said “When I die THAT is what I want to be” Fly on Dad. Following cremation, visitation will be held on Friday, November 5th from 4pm - 6pm in the Dumont-Sullivan Funeral Home, 50 Ferry St., in Hudson. Burial will be private.

After a long and self--described &#8220;good life&#8221; Raymond George Ellis, Sr has earned his wings. Born in New York City on November 28, 1925 his parents wisely decided to move back to New England and settled in Hudson, NH where they... View Obituary & Service Information

The family of Raymond George Ellis, Sr. created this Life Tributes page to make it easy to share your memories.

After a long and self--described “good life” Raymond George Ellis,...