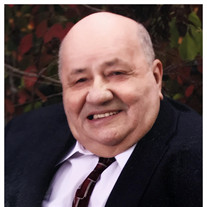 Raynald Dubord, 81, passed away peacefully Saturday, July 18th, 2020 after a long illness. Ray is the loving husband of Ginette (Laurendeau) Dubord with whom he spent 55 years of marriage. Ray was born in La Guadeloupe, Quebec, Canada to the late Gedeon and Florence (Ferland) Dubord. He was a devout Catholic and communicant of St. John the Evangelist Church in Hudson, NH. Ray will always be remembered for his incredible work ethic, wicked sense of humor, and his infectious laugh. When he smiled there was a twinkle in his eye that showed his genuine spirit and love of life. Ray was a prankster who was down to earth with a tremendous heart and generous, giving nature. His favorite activity was going to the beach with Ginette to sit and read or just people watch. Ray loved to be outdoors and would bring his family to the White Mountains whenever possible. Ray’s intelligence went far beyond his formal schooling. A proud member of the Carpenter’s Union for over thirty years, Ray’s contributions can be found in many of the most famous buildings in Boston, including the Prudential Center, Mass General, and the John Hancock Tower. Ray was able to pass his trade, talents, and work ethic to his son Robert. Ray looked forward to time with his children, whether it was working side by side with Robert, watching Jimmy ski, or teaching his daughter Michele about history and political science. Ray inspired each of his children to follow their dreams, seek an education, and to always keep laughing. But mostly, he taught them to not ever take away someone’s livelihood, to always show up, and to never burn bridges because you never know when you may have to cross them again. Ray spent his final years happily at Bedford Hills Center, where his laughter and jokes would ring down the halls. He loved having his Dunkin’ Donuts Iced Coffee and especially Chinese food and ice cream. The family would like to extend their utmost thanks for the loving care Ray received from the Bedford Hills staff including Renee, Erica, Michelle, Anissa, and Stephanie. In addition to his wife Ginette, he is survived by his three children, Robert Dubord of Hudson, NH, Michele McGovern and her husband Michael of Manchester, NH, and Jimmy Dubord and his wife Kristen of Nashua, NH. Ray is also most proud of his beautiful granddaughter Danielle McGovern. He is also survived by his two sisters, Huguette Dubord and Claudette Dubord, both of Montreal Canada, sister in law Ginette Dubord of Hudson, his brother in law Gaston Gosselin also of Hudson, as well as many other sisters and brothers in law, nieces and nephews. Ray is predeceased by his brother Marcel Dubord and sister Raymonde Gosselin both of Hudson. Visitation will be held on Thursday, July 23rd from 5-7pm at the Dumont-Sullivan Funeral Home, 50 Ferry St., Hudson with a funeral service being held the following morning, Friday, July 24th to begin at 10am in the Funeral Home. Public may arrive beginning at 9:30am. A limited number of guests will be allowed inside the funeral home to visit with the family for a limited amount of time on a rotating basis. All guests are asked to please wear a mask or facial covering. For those who are unable to attend due to Co-Vid, the family will be holding a full memorial service to be followed by a party in celebration of Ray’s life to be announced at a later date.

Raynald Dubord, 81, passed away peacefully Saturday, July 18th, 2020 after a long illness. Ray is the loving husband of Ginette (Laurendeau) Dubord with whom he spent 55 years of marriage. Ray was born in La Guadeloupe, Quebec, Canada to the... View Obituary & Service Information

The family of Ray Dubord created this Life Tributes page to make it easy to share your memories.