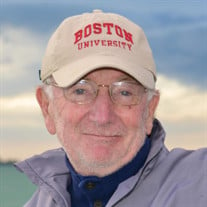 Peter G. Dolloff, longtime resident of Hudson, New Hampshire, passed away peacefully at his home, surrounded by his family on April 26th, 2020, at the age of 85.  He was born April 22, 1935, to Francis W. and Jenny Sarah Dolloff of Waltham, Massachusetts. Peter was predeceased by the love of his life, Leona A. (Rousseau) Dolloff, whom he married on September 10,1960, at St. Charles Church in Waltham. Peter is survived by his sister Frances Orland, who resides in Santa Cruz, California, with her husband Ted Orland. His children include his son Peter and wife Laura Dolloff, of Manchester, New Hampshire; his son H. Francis Dolloff and wife Pamela Dolloff, of Concord, New Hamphsire; his son Christopher Dolloff and wife Theresa Dolloff of Scottsdale, Arizona; his daughter Dr. Jennifer Dolloff and husband Richard Zampieri of Brookline, New Hampshire; and his daughter Elizabeth Dolloff Grundhoefer and husband Michael Grundhoefer, of St. Paul, Minnesota.  Peter will be dearly missed by his eleven loving grandchildren and eleven great-grandchildren, who called him “Pop”: Ashley Stiles, Stephanie Cotito-Dolloff, Brittany Dolloff, Samantha Sanchez, Adam Dolloff, Michele Mehrabian, Sarah Dolloff, Isabella “Bella” Zampieri, Giovanni “John” Zampieri, Anna-Beth Grundhoefer, and Theresa “Tess” Grundhoefer; great-grandchildren include Nathaniel, Eva, Matthew, Logan, Dayana, Walter, Rosamond, Frederick, Bentley, Jack, Greyson.   Peter graduated from the College of the Holy Cross with a Bachelors of Science Degree in 1956; he received a Masters of Education in 1961 from Boston State College; he received a Certificate of Advanced Graduate Study in Educational Administration from Boston University in 1969. Peter served his country in the United States Army for two years before embarking on a professional career in education. He started his career as a teaching Principal of Brookline Elementary Schools from 1961 to 1964. From 1964 through 1966 he served as the Principal of Bedford Memorial School and McKelvie School. From 1966 through 1971 he served as the Assistant Superintendent to School Administrative Unit (SAU) 27, and Superintendent from 1971 through 1997. During this time, the School Administrative Unit 27 included the towns of Hudson, Litchfield, Bedford, Merrimack, Windham, and Pelham. During his career, Peter served as President of the NH School Administrators’ Association and the New England Association of School Superintendents. He was awarded the New Hampshire Superintendent of the Year in 1990. Peter served as the Chairman of the Board of the New England School Development Council and Chairman of the Board of NH School Insurance Trust. He was a founding member of SERESC (Southeastern Regional Educational Service Center). Peter was a Charter Member of the Hudson/Litchfield Rotary Club and was named a Paul Harris Fellow by the NH Rotary Club. He was a member of the Board of Directors of the Nashua Adult Learning Center, and a member of the Board of Directors of the Greater Nashua YMCA, for which he also served as Trustee. Peter was an active member of the Alvirne Trustees from 2010 until the time of his death. A sports enthusiast who loved the outdoors and being active, Peter enjoyed hiking, camping, skiing, tennis, and golf; he was committed to running or walking daily. He ran in multiple road races, including the Milwaukee Marathon and the Hollis Half-Marathon. Early in his life, he was a skilled baseball player and bowler. Peter was a voracious reader and lifelong student. He and Leona were fond of traveling with the Road Scholars, as well as other educational groups. One of his pursuits was to visit as many Presidential Libraries as possible across the country. From their travels Peter collected a large number of the United States Presidential biographies and loved nothing more than reading about our Presidential history. "We make a living by what we get;  we make a life by what we give" Winston Churchill A private memorial service for the family will be held in the Dumont-Sullivan Funeral Home in Hudson, NH. This service will be live streamed for the public and take place at 11:00am EST on Friday, May 1st. Please use the link below for Facebook Live at https://t.yesware.com/tt/ad9e65baf2923dee50512c63762b1422bc0cb707/15d3bce405103baa95641c0d4d9386bd/56410d78983157c4ef6af7aaa4e89a95/www.facebook.com/ashley.dolloffstiles/posts/10217218337026875 In lieu of flowers the family encourages those choosing to make a donation in Peter’s name, please consider the following charities: Doctors Without Borders:   https://www.doctorswithoutborders.org/support-us Catholic Charities:   https://www.cc-nh.org Nashua Soup Kitchen: https://nsks.org/make-a-donation/ Massachusetts General Hospital Leukemia Treatment program: https://www.massgeneral.org/cancer-center/treatments-and-services/leukemia

Peter G. Dolloff, longtime resident of Hudson, New Hampshire, passed away peacefully at his home, surrounded by his family on April 26th, 2020, at the age of 85.  He was born April 22, 1935, to Francis W. and Jenny Sarah Dolloff of Waltham,... View Obituary & Service Information

The family of Peter G. Dolloff created this Life Tributes page to make it easy to share your memories.