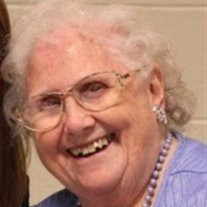 Pearl Rosena (Austin) Ritter, 85 of Hudson, NH died Friday January 25, 2013 at St. Joseph Hospital in Nashua, NH following a brief illness. She was born December 27, 1927 in Booth’s Corner, PA, daughter of the late Herman and Idella (Green) Austin. She was predeceased by her husband, S. Thomas Ritter in 1989 as well as by her three brothers; Raymond Austin, Carlos Austin, and Philip Austin and her two sisters; Dorothy Hickman and Thelma Austin. Pearl was always known as a numbers person who was employed with Christian Mutual Life Insurance, Sears, and Blue Cross & Blue Shield in Concord, NH until her retirement in 1992 following many years of dedicated employment. She was faithfully devoted to the churches she attended and taught Sunday school for many years as well as serving as church treasurer. Her family was always her focus and she thoroughly enjoyed her children, and grandchildren and the pictures of her new great-grandchild. She was active in Hudson Seniors performing the duties of treasurer for seven years and participated in the “Grammy Program” at the Amherst Street School in Nashua for several years. Pearl will also be remembered for the hundreds of prayer shawls she made for St. Joseph’s Hospital Comfort Shawl Ministry. Survivors include a daughter Laura Ritter-Cox and her husband Ronald Cox of Hudson, a son Daniel Ritter and his wife Patricia of Bozeman, MT, four grandchildren 1stLt Daniel Ritter, Jr. and his wife Desiree of Camp Lejeune, NC, Jeremy Cox of Manchester, NH, Jennifer Cox of Hudson, and Katherine Ritter of Bozeman, MT, a great grandson Dean Ritter of Camp Lejeune, NC, as well as many nieces, nephews, and cousins. Visiting Hours will be held on Wednesday January 30th from 4pm-7pm in THE DUMONT-SULLIVAN FUNERAL HOME, 50 FERRY ST., IN HUDSON. A Service of Remembrance will be held on Thursday January 31st at 11am in the funeral home. Family and friends may meet at 10:30am. Burial after a short graveside service will be at Blossom Hill Cemetery in Concord, NH at 2pm. In lieu of flowers the family encourages donations be made in Pearl’s loving memory to Lowell First Church of the Nazarene, 1195 Varnum Ave, Lowell, MA, 01854.To share an online message of condolence or for directions, please visit www.dumontsullivan.com. THE DUMONT-SULLIVAN FUNERAL HOME IN HUDSON IS IN CHARGE OF ARRANGEMENTS.

The family of Pearl Ritter created this Life Tributes page to make it easy to share your memories.