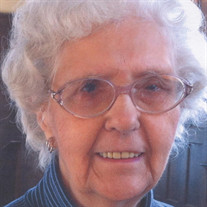 Pauline Ida (Bourgoine) Ross (93), died November 18, 2014 at Community Hospice House in Merrimack, NH, surrounded by family and loved ones. Pauline was born on February 22, 1921 in West Enfield, Maine, the third of seven children of Melanie and Paul Bourgoine. She resided in Hudson, NH for over 50 years, where she moved from Bangor, Maine in 1962. Pauline was predeceased in 1998 by her loving husband of 58 years, John P. Ross. Pauline was a 1939 graduate of Brewer High School. She worked at the Bangor Daily News during the war years, and later at the Hood Ice Cream Factory in Bangor, Maine. She was a parishioner of Saint John XXIII Catholic Church in Hudson. Later in life Pauline discovered a hidden talent in painting and became an accomplished artist in canvas and oils. Her works tended toward still life, and tranquil nature scenes, particularly lighthouses and seascapes reflecting her Maine heritage. She was an active member of the Nashua Area Artists Association and regularly exhibited at their Greeley Park Annual Art Show, as well as many other venues around the region. Pauline was most beloved and admired in her extended family network. Her children, nieces, nephews, grand children and great-grand children all loved her dearly for her caring manner, her ability to listen, and genuine affection. She touched all she met with her kindness and grace, and said of herself, “I want to be remembered as someone who never hurt anyone’s feelings.” Pauline is survived by her sons James Ross and wife Donna, and Jerry Ross all of Hudson, NH, grandchildren Jason Ross, Amanda Cirillo and husband Steven, Eric and Elizabeth Ross, great-grandchildren Cadence and Cullen Cirillo, sister Mary Senneke of Aurora, Illinois, and many nieces and nephews. She was predeceased by brothers Percy, Neil, Dave and George Bourgoine, and sister Bella Bourgoine. Calling hours will be on Friday, November 21, 2014 from 4:00 p.m. to 7:00 p.m. at the Dumont-Sullivan Funeral Home, 50 Ferry St, Hudson, NH. A Mass of Christian Burial will be held at Saint John XXIII Parish Church, 27 Library St, Hudson, NH. at 11:00 a.m. on Saturday, November 22, 2014. Following the Mass, Pauline will be interred alongside her husband John at St. Patrick Cemetery, 102 Derry St, Hudson, NH. The family has requested that in lieu of flowers donations be made to the Nashua Area Artists Association Scholarship Fund, P.O. Box 70, Nashua, NH 03061, or the Community Hospice House, Development Office, 7 Executive Park Dr., Merrimack, NH, 03054.

The family of Pauline Ross created this Life Tributes page to make it easy to share your memories.