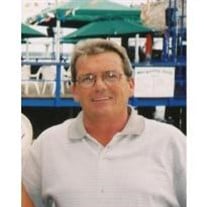 Paul E. Bessette, 64 of Litchfield, NH died Saturday March 12, 2011 at his residence. He was born February 3, 1947 in New Bedford, MA, son of Marjorie (Kelley) Bessette of New Bedford, MA and the late Eugene Bessette. He was the husband of Carol (Columbus) Bessette of Litchfield. Paul retired from Verizon in 2003 following 34 years of dedicated employment. He was a Vietnam Army Veteran who was a member of American Legion Post 48 Hudson and a Lifetime Member of the VFW Hudson Post 5791. Paul was an avid golfer and salt water fisherman who enjoyed throwing horseshoes and shooting pool. His greatest enjoyment came when spending time with his family, especially his daughter Amanda and his granddaughter Skyla Ann. Besides his loving wife Carol and mother Marjorie, survivors include a daughter Amanda Bessette of Litchfield, a Son and a daughter in law Michael and Katherine Bessette of Weymouth, MA. Four grandchildren Skyla Ann, Andrew, Zachary, and Nathan. A brother and a sister in law Wayne and Patricia Bessette of Tampa, FL. Two sisters and a brother in law, Doreen Benedetti of New Bedford, MA, Christine and Rick Brown of Fairhaven, MA. A father in law William Columbus, two brothers in law Bill Columbus and his significant other Colleen Jessen, and Michael Columbus all of New Port Richey, FL. A sister in law Amy Maciulewicz and her husband George of Rincon, GA. Elizabeth O’Brien, who was loved like a sister to Paul, and her husband Bill. As well as many nieces, nephews, and cousins. Visiting Hours will be held on Wed. March 16th from 3pm -6:30pm in the DUMONT-SULLIVAN FUNERAL HOME, 370 MAIN ST. IN NASHUA. A Prayer service will begin at 6:30pm in the funeral home. Burial will be private. In lieu of flowers the family suggests donations be made in Paul’s loving memory to Wounded Warrior Project, 7020 AC Skinner Pkwy, Suite 100, Jacksonville, FL 32256.

Paul E. Bessette, 64 of Litchfield, NH died Saturday March 12, 2011 at his residence. He was born February 3, 1947 in New Bedford, MA, son of Marjorie (Kelley) Bessette of New Bedford, MA and the late Eugene Bessette. He was the husband... View Obituary & Service Information

The family of Paul E. Bessette created this Life Tributes page to make it easy to share your memories.