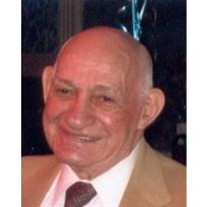 Paul “Apples” Georges, 93, a lifelong resident of Lowell, died peacefully on Friday, January 2, 2009 at the Heritage in Lowell. He was born March 26, 1915 in Lowell, son of the late Polizolis and Elizabeth (Matson) Georgeopoulos. Paul was the husband of Alice (Kroll) Georges with whom he shared 72 loving years of marriage. He was employed with B & M Railroad in Billerica for 20 years. Paul was also employed as a Receiver with Demoulas and Market Basket in Wilmington. His later years were spent working for the city of Lowell where he was the Democratic City Clerk for 15 years. For many years he and his wife Alice enjoyed wintering in Florida. He was a longtime season ticket holder to the Lowell Spinners, he enjoyed game shows and passed the time by solving crossword puzzles and word jumbles. He was a lifelong Yankees fan whose greatest joy was spending time with his family, especially his grandchildren and great grandchildren. He was predeceased by three brothers; James Georgeopoulos, Anastasios “Tarsey” Georgeopoulos, George Georges and a sister; Christine Dziczek. Also by a granddaughter; Maryellen Riley. Besides his loving wife Alice, survivors include two sons and two daughters in law; Paul and Rosemary Georges of Bradenton Beach, FL, Francis and Rita Georges of Lowell. Two daughters and two sons in law; Ann and James Connors of Hampton, NH, Betty and Leo Dumont, Jr. of Hudson, NH. Six Grandchildren; Paula Hamel of Chelmsford, Jim Connors of Hampstead, NH, Lisa Toohey of Hudson, NH, Leo Dumont III of Hudson, NH, Frank Georges of Lowell, and Maria Georges of Washington, DC. As well as 9 great grandchildren. Also; a sister; Constance Frangoudis of Lowell. A sister in law; Anna Georgeopoulos of Lowell. A brother in law; Joseph Dziczek of NC, and a brother in law and a sister in law; Frank and Thelma Kroll of Northboro, MA. As well as many dear nieces, nephews, cousins, and friends. Visiting Hours will be on Mon. Jan. 5th from 4-8pm in the DUMONT-SULLIVAN FUNERAL HOME, 50 FERRY ST. (Rte 111) IN HUDSON, NH. A Funeral Mass will be celebrated on Tues. Jan. 6th at 10am in the Holy Trinity Polish Church, 340 High St., in Lowell. All Are Asked To Meet At Church. A Chapel Service will take place in St. Patrick Cemetery following Mass and burial will take place at Holy Trinity Cemetery in the Spring. In lieu of flowers the family requests donations be made in Paul’s loving memory to Elder Services of Merrimack Valley, Inc., Development Office, 360 Merrimack St., Bldg. 5, Lawrence, MA 01843.

Paul “Apples” Georges, 93, a lifelong resident of Lowell, died peacefully on Friday, January 2, 2009 at the Heritage in Lowell. He was born March 26, 1915 in Lowell, son of the late Polizolis and Elizabeth (Matson) Georgeopoulos. Paul... View Obituary & Service Information

The family of Paul "Apples" Georges created this Life Tributes page to make it easy to share your memories.