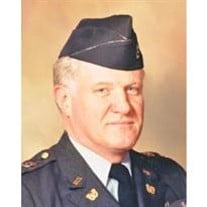 Paul D. Hamilton, Sr. of Hudson passed away on Sunday, August 5, 2012 after a long battle with cancer. He was born in Exeter, NH on October 16, 1939 to the late Ruth (Eastman) and Leroy Hamilton, Sr. After graduating from Exeter High School, he joined the Navy and served our country for 10 years before settling in Hudson to raise his family with his wife of over 50 years, Beverly (Fortier) Hamilton. Paul worked at Sanders, later Lockheed, for 28 years before retiring after complications of a stroke. He also retired from the Army National Guard as a Chief Warrant Officer, once again, proudly serving his country. He was an avid outdoorsman enjoying fishing, hunting, and bird watching. Paul was proud of his vegetables that he grew in his garden and loved working with bees. He was a communicant of St. John the Evangelist Church where he helped with the youth group when his children were younger. Paul was also a member and past chairman of the Hudson Recreation Committee, coached baseball in Hudson, a member of the Knights of Columbus, and a member of the Merrimack Valley Bee Keepers. He spent time at the Pinnacle Mountain Fish and Game as well as the Hudson Fish and Game Club. He enjoyed playing cribbage at the American Legion in Hudson. He was known to the children of Hudson as “The Bee Man” bringing his observation hive to several elementary schools each Spring. He will also be remembered for his clown costume at the Halloween parties sponsored by the CHIPS Committee and the Hudson Police Dept.. Paul would often be found helping out at town wide events as well as the Hudson Police sponsored blood drives. Besides his loving wife Beverly, Paul is survived by his three children and their families; Sherri (Hamilton) and Lee Lavoie of Hudson, Paul, Jr. and Veronica Hamilton of Hudson, and Michael and Karina Hamilton of Manchester, six grandchildren; Mitchell and Kelly, Sarah, Connor and Jacob, and Devon as well as several nieces and nephews, a sister Donna Demasky of MD, two brothers, David Hamilton of TN, and Robert “Bob” Hamilton of MA. Visiting Hours will be held on Wed. Aug. 8th from 5pm-8pm in THE DUMONT-SULLIVAN FUNERAL HOME, 50 FERRY ST. IN HUDSON. A Funeral Mass will be celebrated on Thurs. Aug. 9th at 10am at Blessed John XXIII Parish in St. John the Evangelist Church, 29 Library St., Hudson. ALL MAY MEET AT CHURCH. Burial will be in St. Patrick Cemetery, Hudson. In lieu of flowers the family requests donations be made in Paul’s loving memory to either Home Health & Hospice Care, Attention Hospice House, 7 Executive Park Dr., Merrimack, NH 03054 or St. Vincent de Paul Food Pantry, 121 Allds St., Nashua, NH 03060, or the charity of one’s choice.

Paul D. Hamilton, Sr. of Hudson passed away on Sunday, August 5, 2012 after a long battle with cancer. He was born in Exeter, NH on October 16, 1939 to the late Ruth (Eastman) and Leroy Hamilton, Sr. After graduating from Exeter High School,... View Obituary & Service Information

The family of Paul Hamilton, Sr. created this Life Tributes page to make it easy to share your memories.