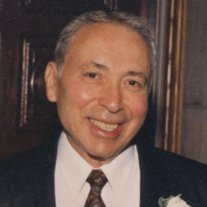 Paul Case, 87, died August 11, 2013 surrounded by his loving family at the Community Hospice House in Merrimack, NH. He was born in New York City on December 3, 1925, son of the late Philip and Lillian (Marinelli) Case. After graduating from DeWitt Clinton High School in the Bronx, NY, he enlisted in the U.S. Navy serving aboard the USS Southerland in the South Pacific during WWII. He attended New York University under the G.I. Bill graduating with a degree in economics. Paul met his loving wife Bernadette at Meinhardt & Company in New York where he worked in the credit department. He retired from Nashua Corporation in Nashua, NH where he worked for 28 years managing their international credit operations. Paul gave selflessly to his family and community. He taught CCD at St. John the Evangelist Church in Hudson, NH and was a volunteer for many years with the st. Vincent DePaul Society. He also coached his children’s Little League teams and Nashua Youth Soccer teams. Paul was an avid gardener and a longtime member of the YMCA. He enjoyed playing the piano, traveling with his wife, and spending time with his children and grandchildren. In addition to his parents, he was predeceased by his brother, Reverend Monsignor Vincent Case. He is survived by his devoted wife of 53 years, Bernadette (McGurrin) Case; four children, Philip Case of Manchester, NH; Maureen Grier and her husband Brian of Raleigh, NC; Vincent Case and his wife Irina of Lexington, MA; and James Case and his wife Joy of Andover, MA; six grandchildren, Kathryn Grier and Philip Grier of Raleigh, NC, Elizabeth Case and Laura Case of Lexington, MA, Ryan Case and Emily Case of Andover, MA; his sister Lillian Gilbert of Rye, NY; and several nieces and nephews. Visiting hours will be held on Tuesday, August 13th from 6pm-8pm in THE DUMONT-SULLIVAN FUNERAL HOME, 50 FERRY ST. IN HUDSON. A funeral mass will be celebrated on Wednesday, August 14th at 10am in Blessed John XXIII Parish at St. John the Evangelist Church, 27 Library St., Hudson. All may meet at church. Burial will be held in St. Patrick Cemetery in Hudson. In lieu of flowers the family encourages donations in Paul’s loving memory to either Home Health & Hospice Care, attention: Hospice House, 7 Executive Park Dr., Merrimack, NH 03054 or Nashua YMCA Strong Kids Campaign, 24 Stadium Dr., Nashua, NH 03062.

Paul Case, 87, died August 11, 2013 surrounded by his loving family at the Community Hospice House in Merrimack, NH. He was born in New York City on December 3, 1925, son of the late Philip and Lillian (Marinelli) Case. After graduating from... View Obituary & Service Information

The family of Paul Case created this Life Tributes page to make it easy to share your memories.