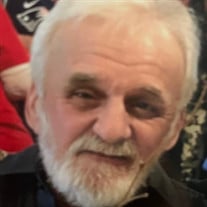 Paul Henry Allen, 64, a longtime Hudson resident, passed away peacefully on December 22, 2021 after a hard-fought battle with cancer. He was the beloved husband of Leonora L. Allen for 25 years. Paul was born in Lowell, Massachusetts on November 5, 1957, a son to the late George Allen and Yvonne (Morin) Allen. Paul began to hunt and fish with his father and brothers at a very young age and continued to do so with his brothers and grandchildren until his last days. After attending Dracut High School, where he made life-long friends, Paul joined the carnival where he worked for many years. He was able to travel around the United States and enjoyed telling stories about his days in the carnival. He later opened up a well-known local diner in Dracut. Upon retiring from the restaurant industry, Paul worked for LaPlante Trucking and Landscaping for nearly 30 years. Family was extremely important to Paul and there was nothing he loved more than spending time with his children, grandchildren and great granddaughter, Amari. He enjoyed teaching everyone how to ice fish, ice skate, play hockey and build snow ramps. Paul was an avid sportsman and loved to be outdoors. He enjoyed taking all the children for rides on the four-wheeler and teaching them to hit all targets in life. Paul had an eye for landscaping, and he used those skills to make his house a beautiful home. Paul was an amazing cook and passed down many recipes to his family. He was a New England Sports teams fan, who enjoyed watching his beloved Red Sox, Bruins and Patriots. Paul was proud of his extensive collection of eagles and enjoyed riding his motorcycle. He looked forward to his yearly trip to Motorcycle Week, in which he celebrated his wedding anniversary with his wife, Leonora. He was loved by all who had the good fortune to know him and will be deeply missed. In addition to his wife, Paul is survived by his daughter Elisha Y. Allen of Lowell, Massachusetts and her children, Elexis Y. Allen of Nashua, New Hampshire and Xavier R. Archambault of Lowell, Massachusetts. Paul is survived by his mother, Yvonne (Morin) Allen of Dracut, Massachusetts. He is survived by his brothers and sisters: Joanne Allen, George Allen, Ruthie Markgren and her husband Russell all of Dracut, Massachusetts,; Sandra Daigle and her husband Mark of Nashua, New Hampshire; and Walter “Bucky” Allen and his wife Donna of Pelham, New Hampshire. Paul is survived by his stepchildren, Melissa Federico and her husband Jeremy of North Carolina, Marie Mahoney of Leominster, Massachusetts, Carolynn Kraus of Hudson, New Hampshire and Michael May of Lowell, Massachusetts. In addition, Paul is survived by his great granddaughter Amari E. Maldonado of Nashua, New Hampshire and grandchildren Adrienne and Sean Chipfunde of Hudson, New Hampshire, Nikita Sarantakis, Makayla Mahoney, Ciara Mahoney, William Mahoney and Domenick Roman of Lowell, Massachusetts, and Megan Federico, Emily Federico and Nicholas Federico of North Carolina. He is survived by many nieces, nephews, cousins, aunts, and uncles. Paul is also survived by longtime friends; Danny Sweeney and Pat Gendron both of Pelham, New Hampshire. Paul was predeceased by his father, George R. Allen. Family and friends will gather to honor and remember Paul for a period of visitation on Wednesday December 29, 2021 from 4:00 pm until 7:00 pm in the Dumont-Sullivan Funeral Home, 50 Ferry Street, Hudson, New Hampshire. Face masks and / or facial coverings are required for attending the visitation in the funeral home. A Graveside Service will be held on Thursday, December 30th at 12:00pm noon in Gibson Cemetery in Pelham, New Hampshire. All are asked to please meet at the cemetery.

Paul Henry Allen, 64, a longtime Hudson resident, passed away peacefully on December 22, 2021 after a hard-fought battle with cancer. He was the beloved husband of Leonora L. Allen for 25 years. Paul was born in Lowell, Massachusetts on November... View Obituary & Service Information

The family of Paul Allen created this Life Tributes page to make it easy to share your memories.