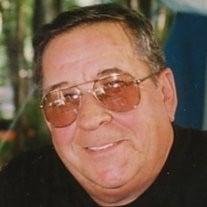 Oswald Donald Boilard, 80, of Hudson, NH died on Monday April 29th, 2013 at the Ridgewood Care Facility in Bedford, NH surrounded by his loving family. Oswald was born on June 12, 1932 in Nashua, NH son of the late Oswald H. and Adrienne (Marquis) Boilard. Oswald was the loving husband of Sharon J. (Gouette) Boilard with whom he shared many years of marriage. Oswald served his country honorably in the US Army During the Korean War, being stationed in Germany for three and a half years and was a member of the Hudson NH American Legion Post #48. Oswald served as the Vice-President of the Otarnic Pond Co-Op, was an avid golfer and loved the outdoors, especially fishing and camping and also playing cards and riding motorcycles with his brothers and his sons. Above all he will be remembered as a true family man. Besides his loving wife Sharon, Oswald is survived by a daughter, Heidi Bousquet of Derry, NH; four sons, Jamie Boilard and his wife Debra of Raymond, NH, John Boilard and his wife Monique of Hudson, NH, Stephen Boilard of Derry, NH and Leonard Boilard and his wife Amy of Hooksett, NH; a brother Gerald Boilard and his wife Patricia of Hudson, NH; two sisters, Constance Picard and her husband James of Amherst, NH and Natalie Smith of Nashua, NH; a brother-in-law, Robert Gouette and wife Esther of Laconia, NH; two sister-in-laws, Barbara Foley and Husband Raymond of Hudson, NH and Carol Charland and husband Joseph of Syracuse, NY; twelve grandchildren; four great-grandchildren and many nieces, nephews and dear friends. Visiting Hours will be held on Monday May 6th from 5-8pm in the DUMONT-SULLIVAN FUNERAL HOME, 50 Ferry St., Hudson. A Funeral Mass will be celebrated on May 7th, the following morning, at 10am in St. Kathryn’s Church, 4 Dracut, Rd., Hudson. All To Meet At Church. Burial will take place following Mass at Holy Cross Cemetery, Ledge Rd., Hudson. In lieu of flowers, the family has requested that donations be made to the American Diabetes Association, 249 Canal St., Manchester, NH 0310.

The family of Oswald D. Boilard created this Life Tributes page to make it easy to share your memories.