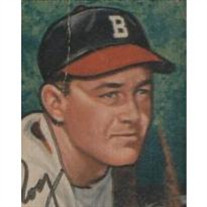 Norman B. Roy III, 82 of Nashua died Tuesday March 22, 2011 at St. Joseph Hospital in Nashua following a brief illness. He was born November 15, 1928 in Waltham, MA, son of the late Norman and Helen (Madden) Roy II. Norman was a former Major League Baseball Pitcher with the Boston Braves in the 1950's. He was later employed with Raytheon for over 38 years at both the Bedford, MA and Tewksbury, MA locations. He was an avid golfer and longtime member of Nabnasset Country Club in Westford. Norman was also a Lifetime Member of the Maynard Lodge of Elks #1568 and a member of the H.E. Fletcher Club in Westford. Survivors include one son and a daughter in law Michael and Cheryl Roy of Maynard, MA, Five daughters and a son in law, Jane Roy and Donna Roy both of Ashland, MA, Kathleen Roy of Derry, NH, Joanne Roy and her companion Donald Berard of Arlington, MA, Karen and Jeffrey Zumpano of New Milford, CT. Three grandchildren Kristin Zumpano, Nicholas Zumpano, and Patrick Simpson. Norman's companion of 33 years Jane Schindler of Hudson, NH and her family; Nancy and Will Brucker, Katie Brucker and her son Trevor, John and Beth Lavoie, Amanda Lavoie, Rebecca Lavoie, and Jeff Lavoie. As well as a very dear friend Stephen McGeown of Nashua. Visiting Hours will be held on Thurs. March 24th from 5-8pm in the DUMONT-SULLIVAN FUNERAL HOME, 50 FERRY ST. (Rte 111) IN HUDSON. A Prayer Service will be held on Fri. March 25th at 10am in the funeral home. All may meet at the funeral home at 9:45am. Burial will be in St. Patrick Cemetery in Hudson. In lieu of flowers the family encourages donations be made in Norman's loving memory to the Make-A-Wish Foundation of America, Gift Processing Center, PO Box 749596, Los Angeles, CA 9074-9596.

The family of Norman B. Roy III created this Life Tributes page to make it easy to share your memories.