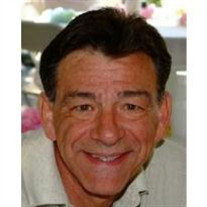 Nicholas J. Kotsonas, 61, of Hudson, NH died after suffering from a brief illness at Southern NH Medical Center on Tuesday, June 15, 2010 surrounded by his loving family. Nicholas was born on January 19, 1949 son of James and Georgia (Worjiotas) Kotsonas of Holden, MA. He was the loving husband of Sylvia (Gignac) Kotsonas of Hudson, NH, with whom he shared 32 years of marriage. Nicholas was a great craftsman that enjoyed fishing and playing the base guitar. He enjoyed the outdoors and his muscle cars. He was a wonderful father to his son and a superb grandfather to his grandchildren who knew him as "Papou." Besides his loving wife and parents, Nicholas is survived by a son, Nicholas Kotsonas and his wife MaryBeth of Hudson, NH; a brother, William "Chuck" Kotsonas of Dracut, MA; two sisters, Elaine Molleur of West Brookfield, MA and Francis Mills of Rindge, NH; three grandchildren, Nya Kotsonas of Lowell, MA and Nicholas and Keston Kotsonas both of Hudson, NH; nieces, nephews and many dear friends. Visiting hours will be held on Sun. June 20th from 2-5pm in the DUMONT-SULLIVAN FUNERAL HOME, 50 FERRY ST., HUDSON, with a Prayer Service beginning at 4:30pm.

The family of Nicholas J. Kotsonas created this Life Tributes page to make it easy to share your memories.