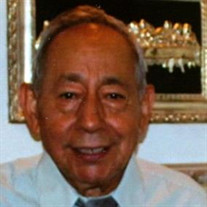 Nestor Elias Veloz, 81 of Hudson, died Saturday, March 21, 2015 at the Community Hospice House in Merrimack surrounded by his loving family.  He was born October 8, 1933 in Milagro, Ecuador, son of the late Elias and Rosa Elvira (Lemarie) Veloz. He was also predeceased by two brothers; Marcos Veloz and Dr. Ernesto Veloz. Nestor was the husband of Blanca (Barragan) Veloz of Hudson, with whom he shared 53 years of marriage.  Nestor and his wife immigrated to America in 1967 and he was employed at Malden Mills for over 33 years. Nestor was a proud, religious, loving man who in his younger years enjoyed fishing at the ocean. He enjoyed caring for his home by planting flowers and constanstly  maintaining his property. He had a sweet tooth and loved a relaxing moment enjoying vanilla ice cream. Most of all, he loved joking with his grandchildren. He had a passion for traveling around the United States and learning all he could about its history. One of his greatest qualities was that he was able accomplish many things with little means. He was the embodiment of the phrase "if there is a will there is a way". Besides his loving wife Blanca, survivors include a son; Pablo Veloz, a daughter; Julieta Stone and her husband Alan, 6 grandchildren; Alexander P. Veloz, Stephanie A. Stone, Ashley R. Veloz, Britney B. Stone, Amy R. Veloz, Andrew P. Veloz, two brothers; Jaime Veloz and Luis Escalante, 6 sisters; Fanny Garcia, America Marin, Rebecca Jaramillo, Elena Palma, Rosa Vallejo, and Gladys Veloz.  Visiting hours will be held on Friday, March 27th from 5pm - 8pm in the DUMONT-SULLIVAN FUNERAL HOME, 50 FERRY ST. IN HUDSON. A funeral mass will be celebrated on Saturday, March 28th at 9:30am in St. John XXIII Parish at St. John Church, 27 Library St. in Hudson. All may meet at church. Burial will be in St. Patrick Cemetery, Hudson.

The family of Nestor Veloz created this Life Tributes page to make it easy to share your memories.