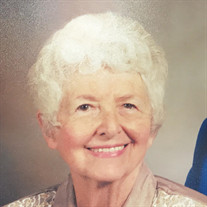 Nancy D. (Nash) Clancy, 88, of Manchester, NH died October 17, 2018 at Mount Carmel Health Care Center in Manchester, NH surrounded by her loving family. Nancy was born August 21, 1930 in Wakefield, MA, daughter of the late Harold F. and Dorothy (Marshall) Nash. She was predeceased in 2015 by her husband, John F. Clancy. She was also predeceased by her brother, Harold F. Nash Jr., and her sister and brother-in-law, Joan and Nelson Coley. Nancy was always at her husband John's side and accompanied him to his many posts around the country and in Germany when he was in the Army as they devotedly raised their growing family. Later she served as John's business partner at their real estate firm, John F. Clancy Associates in Nashua and finally sharing in retirement in Southwest Florida, Milford, and Manchester, NH. Nancy loved volunteering, either at local hospitals or her church parishes. However, her real passion was her deep love of her Roman Catholic faith and devotion to the Blessed Mother which she passed onto many. She will be remembered as a loving and caring daughter, sister, friend, wife, mother, grandmother and great grandmother. Nancy's greatest joy came from spending time with her loving family. Her family includes six sons and one daughter: John F. Of York Beach, Maine; Timothy P. And Laura of Milford, NH; Gregory N. and Kathy of Nashua, NH; William F. And Sharon of Buxton, Maine; James H. and Lynne of Francestown, NH; Thomas E. and Jamie of McLean, VA; and JoAnn P. And Jerry McCarthy of Thornton, NH. Eleven grandchildren: Seth, Conlan, Kelly, Molly, Ryan, Donovan, Luke, Bridget, Issac, Bailey and Christopher. Seven great grandchildren: Mylah, Elijah, Sean, Norah, Mia, Jackson, and Preston. Nancy is also survived by her sister and brother-in-law, Debbie and Rick Lehto, and sister-in-law Millie Nash as well as many nieces and nephews. Visiting hours will be held on October 21st from 1pm to 3pm at the Dumont-Sullivan Funeral Home, 50 Ferry Street, Hudson, NH. A mass of Christian burial will take place on the 22nd of October at 10am at St. Kathryn’s Church, Hudson, NH. Burial will be private. In lieu of flowers the family suggests donations be made in Nancy's memory to the Alzheimer’s foundation.

The family of Nancy Clancy created this Life Tributes page to make it easy to share your memories.