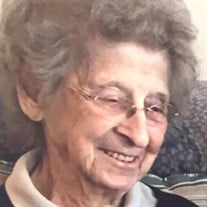 Muriel E. (Winslow) Crosby Lawrence, 95, of Hudson, NH died on Friday April 1, 2016 at Laurel Place in Hudson. Muriel was born on October 29, 1920 daughter of the late Minton and Violet (Estes) Winslow and was predeceased by her two husbands Norman Crosby and John Lawrence. Muriel lived her life in the Nashua and Hudson area and was formerly employed at Law Motor and Blue Line Express. Muriel was active in the Hudson Community Church and then later the Hudson Baptist Church as well as the Senior Center in Nashua. she loved traveling, celebrating holidays and most of all, being with the Crosby and Lawrence families. Muriel is survived by her children Richard Crosby and wife Eldene of Frisco, TX, Marsha McAfee and husband Richard of Nashua, NH, Bradford Crosby and wife Garnette of Concord, NH, Gerald Lawrence and partner Elizabeth Ching of Shelburne VT, Jean Howe and husband Robert of Manchester NH and Karen Wisnoski of Hudson, NH; a brother Gerald Winslow of Hudson, NH; grandchildren, Steve Crosby and wife Darlene of Midvale, UT, Laurie Dohm of Frisco, TX, Todd McAfee and wife Carol of Westford, MA, Jessica Crosby and fiancé Christopher Churchill of Penacook, NH; four great-grandchildren on the Crosby side, Ryan, Hunter, Parker and Ella; numerous grandchildren and great-grandchildren on the Lawrence side and many nieces, nephews and dear friends. A special thank you to the nursing staff at Laurel Place in Hudson, NH, as well as the staff of Home Health and Hospice Care, Merrimack, NH. Visiting Hours will be held on Thursday April 7th from 5-8pm at the DUMONT-SULLIVAN FUNERAL HOME, 50 FERRY ST., HUDSON, NH with a funeral service being celebrated in the Funeral Home the following morning beginning at 10am (public may begin to arrive at 9:30). In lieu of flowers, the family has requested that donations be made to the Community Hospice House Development Office, 7 Executive Park Dr., Merrimack, NH 03054.

Muriel E. (Winslow) Crosby Lawrence, 95, of Hudson, NH died on Friday April 1, 2016 at Laurel Place in Hudson. Muriel was born on October 29, 1920 daughter of the late Minton and Violet (Estes) Winslow and was predeceased by her two husbands... View Obituary & Service Information

The family of Muriel E. Lawrence created this Life Tributes page to make it easy to share your memories.