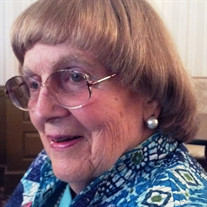 Miriam Jeffries Whitney, 88, of Nashua, New Hampshire died peacefully in her home at Langdon Place, surrounded by her three daughters Friday evening, June 20, 2014. “Mim”, as she was affectionately known, was born in Boston May 24, 1926, the daughter of the late J. Amory Jeffries and Miriam Faulkner Jeffries. She resided in Milton, Massachusetts for most of her life, before moving to Nashua, New Hampshire in 2001. Miriam graduated from Milton Academy, class of 1944. While at Milton, Mim consistently achieved honors. She was an active member of the field hockey and basketball squads. Mim was also in the Glee club, the Madrigal club and the Dramatics club. She went on to Briarcliff Junior College in New York and Wheelock College in Boston, earning degrees at both schools. Prior to getting married, Miriam was a Kindergarten teacher in Meriden, Connecticut, and Milton, Massachusetts where she taught at the Glover School in the early 1950s. In addition to her love of teaching, Mim was an avid traveler, making trips throughout the Americas and Europe. On October 20, 1956, Miriam married her childhood friend Byam (Bing) Whitney, Jr. at the First Parish Unitarian Church in Milton. They lived their first few years of marriage on Beacon Hill in Boston, before moving to Westwood and then Milton, where they raised their three girls, and Mim was a homemaker. Miriam was a member of both the Milton and Quincy choral societies. Their daughters fondly remember their parents rehearsing Handel’s Messiah at home during the Christmas season while accompanying each other on the piano. Prior to marrying, Mim spent many summers in New Hampshire, where her love affair with the White Mountains and Monadnock Region started. Mommy would recall fondly, memories of skiing throughout the White Mountains with family and friends. The family enjoyed many summers spent on Naushon Island and in Princeton, Massachusetts. She and her husband Bing also loved travel in the Caribbean. Miriam was predeceased by her husband Byam and her brothers David and John Jeffries. She is survived by her three daughters Laura Fidone and her husband Joseph of Amherst, NH, Heather Whitney of Framingham, MA, and Gwendolyn D’Amico and her husband Michael of Nashua, NH, 5 grandchildren; Rachael Cooper 24, Anthony D’Amico, 21, Madeline Cooper 20, Zachary D’Amico, 17, and Elizabeth D’Amico, 6. Mim, an avid animal lover, also leaves behind four grand dogs and three grand cats. The daughters wish to extend their heartfelt thanks to their Mother’s caregivers and staff at Langdon Place of Nashua and SolAmor Hospice. Miriam had a deep appreciation for the love and care she received, having been a home health aid for 23 years, caring for elders, after raising her three girls. Miriam was an active member of Lois’s Family Groups for well over 50 years, and leaves a legacy of love and service in that community. She will be fondly missed. A memorial service will be held at The Church of the Good Shepherd, 214 Main Street in Nashua New Hampshire at 11AM on Saturday July 19th, 2014.

Miriam Jeffries Whitney, 88, of Nashua, New Hampshire died peacefully in her home at Langdon Place, surrounded by her three daughters Friday evening, June 20, 2014. &#8220;Mim&#8221;, as she was affectionately known, was born in Boston May... View Obituary & Service Information

The family of Miriam Whitney created this Life Tributes page to make it easy to share your memories.