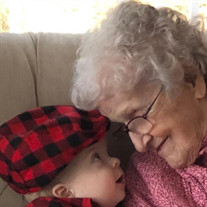 Mrs. Mildred T. “Millie” (Burgoyne) Smith, age 93, of Hudson, died peacefully at the Fairview Healthcare Center in Hudson on Monday, January 27, 2020. She was the loving wife of the late Charles H. “Chick” Smith. Born in Medford, MA she was the daughter of the late Albert and Anna (Begley) Burgoyne. She was raised in Medford and was a graduate of Medford High School, class of 1944. She had lived in Hudson since 1972. Millie had volunteered for many years at the Southern New Hampshire Medical Center. She also worked at the polls on election days. She was an avid reader and was skilled at needlepoint. She and her husband loved going for car rides, spending time in their garden, and sitting on their favorite bench on the Merrimack River. She loved her ice cream, but nothing gave her greater joy than spending time with her family, especially her grandchildren and great-grandchildren. She was the mother of Michael Smith, the late David Smith and his wife Aline, Stephen Smith and his wife Mary, Peter Smith and his wife Deanna, the late Elizabeth Smith, the late Joyce Jobin and her husband William, Donald Smith and his wife Susan, and Sandy Smith. She also leaves 24 grandchildren; 29 great-grandchildren, 1 great-great grandchild, and many nieces and nephews. She was predeceased by nine brothers and sisters. Her funeral will be held on Thursday at 10AM from the Dumont-Sullivan Funeral Home, 50 Ferry St., Hudson, followed by a funeral mass in St. Mark the Evangelist Church in Londonderry at 11AM. Relatives and friends are respectfully invited. Visiting hours are Wednesday from 4-7PM. In lieu of flowers, donations may be made to the Breast Cancer program at the Dana-Farber Cancer institute, P.O. Box 849168, Boston, MA 02284-9168.

The family of Millie Smith created this Life Tributes page to make it easy to share your memories.