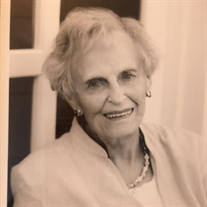 Mildred Geraldine (“Gerry”) Schappals, age 103, passed away peacefully on June 9, 2021 at The Huntington At Nashua. She was born in Worcester, MA on January 18, 1918, daughter of the late Daniel M. and Honorah (Harrington) Lyons. She was preceded in death by her husband, Everett A. “Gus” Schappals, her parents, her brothers Joseph of Alhambra, CA and Paul of Brewster, MA and a sister, Helen Downing of S. Yarmouth, MA and Sarasota, FL. Ever the tough survivor, at the age of ten months, she survived a nearly fatal bout of the 1918 flu, a pandemic that claimed fifty million lives worldwide. She claimed that the illness bestowed a steel immunity. This was probably true because after her recovery she was never ill with the seasonal flu viruses that affected everyone else, never had a headache or even a cold. She was educated in Worcester public schools where she shook hands with Civil War vets on Memorial Day activities, graduated from Worcester Commerce High School in three and one half years and received a Bachelor of Science from Fitchburg State College in 1939. In 1943, while teaching eighth grade in Bowie MD, she met the love of her life: a dashing Navy officer (and, to her parents’ delight, a New Englander, a good cribbage player and a Catholic to boot, all of which compensated for the fact he wasn’t Irish) Everett A. “Gus” Schappals of Danbury, CT. They married in 1945 and were stationed in various places, including Guam (where she opened the island’s first nursery school), Hawaii and Washington DC, managing to have two daughters along the way. In 1960, Mr. Schappals retired from the military and accepted an engineering position with Sanders Associates in Nashua. Within months of settling in Nashua, Mrs. Schappals opened the city’s first book store, “The Book Shelf” on West Pearl Street. In addition to a lively local trade, the store attracted a large clientele from Massachusetts where books like “Tropic of Cancer” by Henry Miller were banned. She missed teaching though, so she sold the store and taught fifth and sixth grade at Fairgrounds Elementary and Broad Street Elementary in Nashua. (Hopefully, her former students can still recite all the Presidents in the correct order). After obtaining a Master’s degree from Rivier College (now Rivier University), she became the first principal at New Searles Elementary in Nashua. She then obtained a C.A.G.S. (Certificate of Advanced Graduate Studies) from Northeastern University. She concluded her career as a Supervisor of Elementary Curriculum and Instruction in the Nashua Public Schools, a position she held for several years until retiring in 1981. Mrs. Schappals was a member of the Retired Teachers Association of N.H., a past board member of various charities including Community Council of Nashua and Girls, Inc. of Nashua. For many years, she was a communicant of Immaculate Conception parish in Nashua. She moved to The Huntington At Nashua in 2004, one the first arrivals in the independent living quarters. During the summer of 2020, she became a media celebrity after an interview with CNN when she was featured as a survivor of both the 1918 flu and the Covid-19 virus. This notoriety led to further interviews for The Washington Post which were also carried in USA today, The Dallas Morning News among others as well as TV shows, “Inside Edition” and “The Doctors”. The Boston Bruins featured her in an end-of-season video honoring New England survivors of the Covid-19 virus. She was shown wearing a Stanley Cup hat and waving a Bruins banner. Her comment about the hat was, “Who is Stanley?” Perhaps the crowning honor of this celebrity was receiving the Keys to the City of Worcester from His Honor Joseph Petty, the Mayor of Worcester. Mrs. Schappals is survived by her two daughters, Jade Walsh of Jackson Hole, WY and Julia Schappals (Harris) of Bedford, NH and their spouses. Survivors also include nephew Paul H. Lyons, Jr of Cape Cod, niece Maureen Knapp of Fairfax, VA as well as 3 grandchildren and 6 great-grandchildren and numerous great grand nieces and nephews. Gerry Schappals will be remembered for her fine taste in wine, a witty sense of humor, fantastic piano playing (everything from jazz to Chopin), her love of a good book and her series of pampered pet dogs, none of which was a decent watchdog. She attributed her longevity to “Mother Nature thought I died in 1918.” In lieu of flowers, and in keeping with Gerry’s love for animals, please consider donations to The Live And Let Live Farm (20 Paradise Lane, Chichester, NH 03258); the New Hampshire Animal Rescue League (545 NH-101, Bedford NH, 03110) or the St. Jude Children’s Research Hospital ( Attn. Memorial Giving, 501 St. Jude Place, Memphis, TN 38105). A memorial service for Gerry will be held at 11AM on August 17 at the Immaculate Conception Church, 216 East Dunstable Road in Nashua. Her many friends are welcome.

The family of Mildred Schappals created this Life Tributes page to make it easy to share your memories.