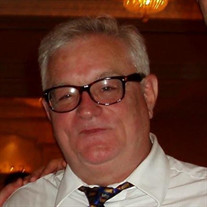 Michael Edward Konovelchick, 62, died unexpectedly at his home on February 10, 2017. Born in Springfield, MA on October 6, 1954 he was the son of the late Michael and Edna (Sharlow) Konovelchick. He graduated from Springfield Technical High School in 1972 and Holyoke Community College in 1978. He proudly served in the U. S. Navy from 1972-1976 as an FMT-2 Fire Control Technician - Missile Systems. He was an independent contractor, consultant, and project manager installing and maintaining advanced computerized systems. He will be remembered for his love of life, his unmatched sense of humor and practical jokes, his wit and witticism, his willingness to lend a helping hand to everyone who ever needed anything. But the Light of his life was his family. He is survived by his daughter, Mia M. Konovelchick of Litchfield NH, and son Michael J. of Jersey City, NJ,; three sisters, Pam Migneault and her husband David of Lavonia, GA, Carol Brissette-Gleason of Greenville, ME, Gail Youngs and her husband William of Wilbraham MA,; two incredibly dear to his heart grandchildren, his grandson Joshua Konovelchick and granddaughter Kylinn Konovelchick; two nieces Marcie Brunelle and her husband Jason, and Jenny Youngs, and a nephew Capt. Torrey Brissette (USMC) and his wife Kristin; great nephews and nieces Cody, Kyle, Joshua, Ethan, Aiden, and Lea; and many cousins. He was predeceased by an infant sister Christine Konovelchick. A Celebration of life will follow the memorial service at Valentino’s, 142 Lowell Rd., Hudson, NH Burial will be at a later date.

Michael Edward Konovelchick, 62, died unexpectedly at his home on February 10, 2017. Born in Springfield, MA on October 6, 1954 he was the son of the late Michael and Edna (Sharlow) Konovelchick. He graduated from Springfield Technical High... View Obituary & Service Information

The family of Michael Edward Konovelchick created this Life Tributes page to make it easy to share your memories.