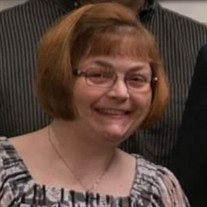 Melissa Theresa Durocher, a life-long resident of Nashua, NH died unexpectedly at home of a long-term cardiac condition on June 5, 2021 at the age of 47. Melissa was born in Nashua on January 30, 1974 to Maurice and the late Pamela (Bellefeuille) Durocher. She graduated from Mt. Saint Mary Seminary in 1992. Melissa then received an associate’s in business degree from Castle College in 1994 and a bachelor’s degree in computer information systems from Rivier College in 1996. She worked in the medical insurance claims processing field for many years. She was employed at SolutionHealth, Nashua. Previous employers were Cigna Health and Aetna.  Melissa is survived by her father, Maurice of Nashua; her sister and brother-in-law, Samantha and Charles Goulet of Nashua; her brother and sister-in-law, Jonathan and Tracy Durocher of Bedford; her two nieces, Abigail and Genevieve Durocher of Bedford; and numerous aunts, uncles and cousins. Melissa was preceded in death by her mother, Pamela, on May 26, 2000 at age 47.  Melissa was an avid reader and loved classic movies. She was a big fan of 80s rock, had an affinity for Bon Jovi, and enjoyed going to concerts. She was an unbeatable pop culture Trivia game player. She loved dogs, especially her pet Yorkshire Terrier, Mocha. Melissa enjoyed hockey—she was a season ticket holder of the Manchester Monarchs for many seasons and she was a Boston Bruins fan as well. She was a Ford Mustang enthusiast and was a proud owner of one for many years.  Visiting Hours will be held on Wednesday June 9th from 4pm - 7pm in the Dumont-Sullivan Funeral Home, 50 Ferry St., in Hudson. A Mass of Christian Burial will be held on Thursday, June 10th at 10 am at St. John XXIII Parish in Infant Jesus Church, 121 Allds St., Nashua. All may meet at church. Burial will follow in St. Francis Xavier Cemetery, Pinehill Ave, Nashua. Masks are optional for all portions of the services.

Melissa Theresa Durocher, a life-long resident of Nashua, NH died unexpectedly at home of a long-term cardiac condition on June 5, 2021 at the age of 47. Melissa was born in Nashua on January 30, 1974 to Maurice and the late Pamela (Bellefeuille)... View Obituary & Service Information

The family of Melissa Durocher created this Life Tributes page to make it easy to share your memories.