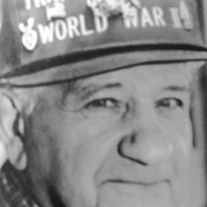 Maurice  A. "KID SHARKEY" Sposato, passed away on May 13, 2016, at Kindred Greenbriar Nursing Home in Nashua, NH.  Maurice was born on May 22, 1917 in upstate NY.   As a young adult he enlisted in the Marine Corps.   He was wounded in the Battle of Tarawa losing two toes and spent many months in a hospital convalescing, thus earning him a Purple Heart, the Presidential Citation, and a Gold Star for his war efforts. His injuries destroyed his dreams of becoming a professional boxer but he never let it get him down. He would often tell people when life gets tough, you gotta "Keep On Punchin”. Prior to joining the Marines, Maurice's boxing career consisted of a 59-9 record, scoring a draw to Sugar Ray Robinson. Upon returning to the states, Maurice enrolled in NYU, majoring in psychology. He later became a private detective.  Maurice never gave up his love of the sport of boxing  and he found his way back into the ring as a trainer to many professional fighters. He could often be found in the corner as a cut man for many Golden Gloves boxers such as Archie Moore, Doug Dewitt, Buster Mathis, Jose Torres,  Larry Holmes and Lou Savarese.  Maurice encouraged many kids to get off the streets and into his gym where they learned how to box but more importantly how to live an honest life through his gift of wisdom. Wisdom that he bestowed upon us to his last day. Maurice is predeceased by his wife, Mary (Kelly) Sposato, a sister, Matilda (Sposato) Magnotta, and his brothers Virgil Sposato and Laurence Sposato. Survivors include his daughter Judy Sposato of Hudson, NH, his sister Lillian (Sposato) Sarrero of Boynton Beach, FL, a granddaughter Gina and her husband James Udice of Hudson NH and three great-granddaughters, Kristina, Cassidy, and Caitlin Udice, also of Hudson NH. He is also survived by several nieces and nephews. A public memorial service will be held in White Plains, NY at a later date to be announced by his beloved nephew, Rocco Magnotta. All services will be private. In lieu of flowers, the family requests any donations be made in his honor to the Boys & Girls Clubs of America, Attention: Resource Development Operations, 1275 Peachtree Street NE, Atlanta, GA 30309-3506 or St. Jude Children's Research Hospital, 501 St Jude Place, Memphis, TN 38105. T

Maurice  A. "KID SHARKEY" Sposato, passed away on May 13, 2016, at Kindred Greenbriar Nursing Home in Nashua, NH.  Maurice was born on May 22, 1917 in upstate NY.   As a young adult he enlisted in the Marine Corps.   He was wounded in the Battle... View Obituary & Service Information

The family of Maurice Sposato created this Life Tributes page to make it easy to share your memories.