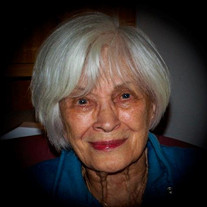 Maryvonne Denner, 92, passed away Wednesday, December 20, 2017 peacefully in her sleep at The Huntington in Nashua, NH.  Maryvonne, the daughter of the late Jochain Mendes  and Stanislawa Laskowska,  was born May 7, 1925 in Provins, France.  She was united in marriage to Raymond L.Denner on November 10, 1945 in Fontainebleau, France. Raymond was one of those brave soldiers who landed on D-Day in Normandy. In Maryvonne’s own words it was “love at first sight for the handsome American 1st Lieutenant and me, his bilingual secretary. After finishing my education, we married. I then left for the USA on a ship of anticipating "war brides" from Europe.” They were married for 30 years until his death in 1984. Maryvonne was a devoted wife and raised two children in Pittsburgh, PA.  Her husband worked for Exxon in Pittsburgh after returning home from WWII. She called Pittsburgh home until she relocated to Nashua, NH in 1995 to be closer to her family. She found great joy in spending time with her children,  grandchildren and great grandchildren. Maryvonne was an avid card player.  She played with many groups in the Nashua area, including at the Nashua Senior Center and the Huntington. She always enjoyed a good game of bridge or hand and foot with her friends. Maryvonne also enjoyed traveling.  She made multiple trips back to France to visit her mother, including extended summer visits when her children were young.  Other destinations in Europe included Portugal, Belgium and Greece.  One of her fondest memories was traveling on a bridge cruise through the Panama Canal. She also made many trips to the west coast to visit her daughter. Maryvonne will be deeply missed by her two children, Bruce R. Denner and his wife Linda of Nashua, NH, and Gail Pettit and her husband Stephen of San Carlos, CA; four grandchildren, Kristin Hort of Westford, MA, Laura Denner of Exeter, NH, Christopher Pettit and  Ryan Pettit of San Carlos, CA; and 5 great-grandchildren. In addition to her husband, she was preceded in death by her mother, Stanislawa Mendes in 2000. Funeral services and Mass of Christian Burial for Maryvonne Denner will be held at 10:00 a.m. Saturday, December 30, 2017 at Immaculate Conception Church, 216 East Dunstable Road, Nashua, NH. All may meet at church. Burial will be private. The family will greet friends from 4:00 – 7:00 p.m. on Friday, December 29, 2017 at Dumont-Sullivan Funeral Homes, 50 Ferry Street, Hudson, NH. In lieu of flowers, memorial donations in Maryvonne’s memory may be made to The Corpus Christi Food Pantry of Nashua ( http://corpuschristifoodpantry.org/?page_id=391 ) or a charity of your choice.

Maryvonne Denner, 92, passed away Wednesday, December 20, 2017 peacefully in her sleep at The Huntington in Nashua, NH.  Maryvonne, the daughter of the late Jochain Mendes  and Stanislawa Laskowska,  was born May 7, 1925 in Provins, France.... View Obituary & Service Information

The family of Maryvonne Denner created this Life Tributes page to make it easy to share your memories.