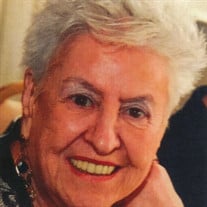 Mary A. (Roarke) Vitiello , 91, of Hudson, NH and formerly Lowell, MA died Sunday, June 14, 2015 surrounded by her loving family.  She was born on August 28, 1923 in Lowell, MA - daughter of the late James and Agnes Roarke.  Mary was the youngest girl from a family of 9 (7 sisters and 2 brothers).   Mary was the beloved wife of Edward Vitiello, Sr. for 69 years and the devoted mother of Edward (Ted) Vitiello Jr. and his wife Linda of Scituate, MA, Lisa Murphy and her husband Steve of Saratoga Springs, NY, and daughter Wanda Nordlie and her late husband Joe Nordlie, Sr. of Billerica, MA.  She was the loving grandmother of Kerry and Josef Vitiello, Steve, Tessa and Julia Murphy, and Joe Nordlie, Jr. and the late Brandon Nordlie. She was also the loving great grandmother of Drew Vitiello and Gianna Aviza.   A period of visitation will be held on Wednesday, June 17th in the Dumont-Sullivan Funeral Home, 50 Ferry St, Hudson, NH from 9:00 AM to 10:30 AM on prior to the funeral mass at 11 AM celebrated in Blessed John XXIII Parish at St. John the Evangelist Church, 27 Library St., Hudson NH. Burial will be held at the later date.  As an expression of sympathy, contributions may be sent in Mary’s name to the Alzheimer's Foundation of America, Kindred Transitional Care and Rehabilitation Greenbriar in Nashua NH, or the charity of one’s choice

The family of Mary Vitiello created this Life Tributes page to make it easy to share your memories.