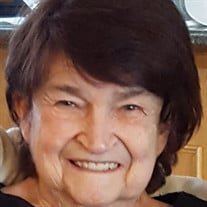 MARY CHRISTINA (ROCHA) ORLEANS, LPN “Grammy” Mary Christina (Rocha) Orleans, 77, of Nashua, NH and formerly of Chelmsford, MA, passed away peacefully surrounded by her family on March 18, 2018. The oldest of four children, Mary was born in Lowell, MA on October 20, 1940. She was predeceased by her husband Richard M. Orleans with whom she had shared 57 years of marriage and by her son Richard W. Orleans. Mary was also predeceased by her parents Zachary Shore and Edith I. (Scally) (Rocha) Shore as well as by a son-in-law, Ronald Gagne. Mary graduated from Chelmsford High School in 1958 where she played trombone in the marching band. She graduated from St. Joseph School of Nursing in Nashua in 1981. Mary worked at Microwave in MA for many years before welcoming her 5 children into the world. Once her children were old enough, Mary accomplished her dream of becoming a nurse. She worked for nursing homes and home care companies in southern NH. She then retired and worked at 7-11 in Hudson, NH where she enjoyed her daily socializing with the public. To round out her employment after retirement Mary worked for First Student Transportation in Nashua as a monitor on the special needs buses. She loved that job and looked forward to it every day. A devoted and loving wife, mother and grandmother, Mary enjoyed volunteering as a Girl Scout Cookie Mom for her girls, a Webelos Den Mother for her boys and after retirement, a t-ball coach in the Nashua East League. She enjoyed traveling with her husband to Germany, Aruba, Hawaii, Bermuda, and annually to their time-share in St. Maarten. One of Mary’s favorite places to visit was Disney World in Florida with her grandchildren. She loved camping with her family while her children grew up. Mary never missed activities or sports that her children and grandchildren participated in. She enjoyed crocheting, bingo, Sudoku and reading. She was an avid Red Sox fan and loved David Ortiz. On many of her overnight trips to Foxwoods she was able to meet not only David but many other current and retired players and quite often she and her husband had dinner with them. Mary was also one of Elvis’ #1 fans. She had all his albums. In addition to her husband, son and parents Mary was also predeceased by her brother-in-laws Robert and his wife Susan Orleans, Marcel (Chuck) Orleans, Edward Orleans, Robert LeClair and Gerard Levesque. Mary is survived by four children, Deborah Orleans of Nashua, NH, James Orleans of Hudson, NH, Lori Sliz of Nashua, NH and Patricia and her husband Mark Osterman of Nashua, NH, twelve grandchildren, Christopher Miller and his wife Nicole, Amanda Miller and her fiancé Adam Caron all of Manchester, NH, Katherine Miller and her significant other James McCullough of Dracut, MA, Amy Long of Manchester, NH, Zack Miller and his partner Joshua Tremblay of Lowell, MA, Michael Sliz of Nashua, NH, Adam Long of Manchester, NH, Matthew Sliz of Nashua, NH, Aaron Long and his partner, Kyle Roby of Tilton, NH and Brianna and Branden Orleans of Hudson, NH. Three siblings, Anthony and his wife Marilyn Rocha of Wells, ME, Gerald and his wife Robin Rocha of St. Augustine, FL and Carol LeClair of Dunbarton, NH. One brother-in-law, David Orleans and his wife Charlotte of Merrimack, NH and four sister-in-laws, Dorothy (Orleans) Levesque of Nashua, NH, Helen (Orleans) and her husband James Nichols of Hudson, NH, Lena Orleans of Merrimack, NH and Karen Orleans of Hopkinton, NH. She is also survived by two godsons, SFC John Orleans of Colorado Springs, CO and Joseph Andrews of Dunbarton, NH, as well as by many cousins, nieces, nephews and friends. Visiting hours will be held on Tuesday, March 27th from 4pm - 8pm in the DUMONT-SULLIVAN FUNERAL HOME, 50 FERRY ST. IN HUDSON. A funeral mass will be celebrated on Wednesday, March 28th at 10am in Immaculate Conception Parish, 216 East Dunstable Rd., Nashua. All may meet at church. Burial will private. In lieu of flowers the family encourages donations be made in Mary’s loving memory to one of the following organizations; David’s House, 461 Mount Support Road, Lebanon, NH 03766, ATTN: Jaye Olmstead, Exec. Dir. or online at davids-house.org/donate/donate-now or to St. Jude Children’s Research Hospital, 262 Danny Thomas Place, Memphis, TN 38105 or online at stjude.org/donate-now

The family of Mary Orleans created this Life Tributes page to make it easy to share your memories.