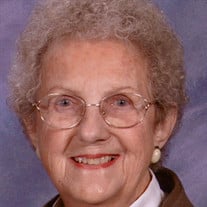 Mary T. Miller, 88, of Hudson, NH passed away peacefully and comfortably in the care of hospice on Tuesday, October 24, 2017, surrounded by her loving family and the support of the Fairview Nursing Home staff. Just shy of her 89th birthday, Mary was born in Nashua on November 12, 1928, daughter of the late John and Alice (Cross) Caron. Mary was the widow of Richard “Dick” Miller who predeceased her in 2010. Mary is a graduate of Nashua High School, Class of 1946, and maintained many life long friendships that blossomed from her younger years in Nashua. Mary married Richard on June 16, 1951and shared a long and loving life together. The two of them lived throughout the country and returned to the area in 1973. Since then, Mary has been a longtime resident of Hudson and most recently, called Fairview Nursing in Hudson, her home. She was previously employed with The Improve of Nashua, Sears Roebuck & Co., and later retired from Indian Head Bank in Nashua. Mary was a communicant of St. John the Evangelist Church where she was a past liturgy reader and Eucharistic Minister. She continued to say her rosary until the very end. Mary loved the White Mountains of NH and the beaches of CT, NH, ME, and Myrtle Beach, SC. She was an avid reader, loved to watch old TV Westerns, enjoyed word puzzles and a good game of bridge. But what she cherished most, was time spent with family and friends. Mary was the loving mother of her son, Michael Miller of Hudson, three daughters, Christine Meehan of Millbury, MA, Karen Armstrong and her husband David Figarsky of Uncasville, CT, Susan Miller and her husband Jay Gassman of Medford, NY; cherished Nana to her five grandchildren, Kim Bucko and her husband Aaron, Danielle Meehan and her partner Dan Fahey, Dawn Meola and her husband Jeff, Kenneth Armstrong, Ashley Gagnon and her husband Shawn, and six great grandchildren, Avery, Jack and Evan Bucko, Zachary and Benjamin Meola, and Rylee Burgess. She is also survived by two sisters in law, Shirley Brickey and Marcia Petersen; a brother in law, Bob Miller and his wife Susan, a nephew Ronald Brickey and his wife Nancy and many dear friends. Visiting hours will be on Thursday, October 26th from 5pm-8pm in the DUMONT-SULLIVAN FUNERAL HOME, 50 FERRY ST., IN HUDSON. A Mass of Christian Burial will take place on Friday, October 27th at 10am at St. John XXIII Parish in St. John the Evangelist Church, 27 Library St., in Hudson. All may meet at church. Burial will begin St. Patrick cemetery in Hudson. In lieu of flowers, the family asks that you express your love daily to your family and friends. It costs nothing and can work wonders….Life is too short.

Mary T. Miller, 88, of Hudson, NH passed away peacefully and comfortably in the care of hospice on Tuesday, October 24, 2017, surrounded by her loving family and the support of the Fairview Nursing Home staff. Just shy of her 89th birthday,... View Obituary & Service Information

The family of Mary T. Miller created this Life Tributes page to make it easy to share your memories.