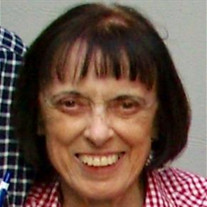 Mary Grace Fariz quietly passed away on Friday evening, August 17, 2018 in Nashua, after a period of declining health. She was born September 16, 1931 in Lowell, MA, the eldest of eight children, born to the late Joseph G. and Eva G. Fariz. Mary is was also predeceased by her brothers Paul and Joseph Fariz; brothers-in-law Albert Garant and George R. Pelletier, Jr. Mary was educated in the local school system and graduated from Lowell High School in 1948. She enrolled in classes at a city college there before moving to Nashua, where she worked at Doehla’s Greeting Cards for thirty years, meeting many people that would become lifelong friends, including Aline Bordeau, who was like a sister to Mary and close friend Raelene Liljeberg. After Doehla’s, Mary transitioned to Kollsman Corporation in Merrimack; Mary then worked at Red Ball Corporation, where she immediately became one of the family and continued working for Red Ball until the factory closed; she eventually was employed by the YMCA corporate office in Merrimack, where she met yet another person that meant so much to her, Roseann Nocella. Mary worked there until she retired at the of 85. Mary loved to read and had a voracious appetite for books. She often went to the Nashua Public Library, typically with a niece or nephew in tow. She loved old movies, shopping and black olives. No holiday was complete unless she brought four cans. She was always on the go and enjoyed many other hobbies including attending the theatre, dining out with friends, (she was a member of the Brunch Bunch), and heading to Hollman Stadium where she had season tickets to the Silver Knights baseball team. She also loved attending a Fisher Cats game or two, or three. The things that mattered most to Mary were faith, family and friends and her life was testament to that. Her most passionate devotion was to her Catholic faith; she was a parishioner of St. Patrick’s Church in Nashua for nearly 70 years and loved attending services at St. Katherine’s Catholic Church, in Hudson, NH. She was also very active in many, many bible studies. Her other passion was her family, where Mary was known to them, especially the kids, simply as “Dina,” a nickname derived from “Madrinha,” the Portuguese word for Godmother. She was Godmother to several of her nieces and the beloved aunt of all. With her family, she spent every holiday, birthday, anniversary, wedding, family gathering and cook-out. Mary loved a good burnt hot dog. Mary is survived by her siblings, Lorraine Pelletier; Rose Garant; James Fariz, and wife Pamela; Terry Huntley and husband Doug Huntley; and Diane Walton and husband David Walton, all of Nashua. She is also survived by her fifteen nieces and nephews, as well as several great nieces and nephews and grand nieces and nephews; many cousins and second cousins, as well as her countless friends. A Funeral Mass will be held on Thursday the 23rd of August from 9:30am at the St. Patricks Church on 29 Spring St. in Nashua. Burial will take place following Mass in Hudson at St. Patricks Cemetery. In lieu of flowers please send donations to: St. Jude's Children's Hospital, Shriners Hospital for Children, or Humane Society for Greater Nashua (HSFN.org).

Mary Grace Fariz quietly passed away on Friday evening, August 17, 2018 in Nashua, after a period of declining health. She was born September 16, 1931 in Lowell, MA, the eldest of eight children, born to the late Joseph G. and Eva G. Fariz.... View Obituary & Service Information

The family of Mary Fariz created this Life Tributes page to make it easy to share your memories.