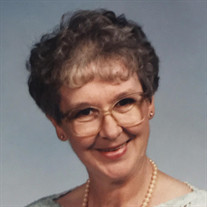 Margaret Mary Agnes Rae passed away Thursday May 3rd , 2018, joining her husband of 39 years, William Rae and her son, Henry Rae. Margaret passed to a peaceful rest surrounded by two generations of loving daughters and sons after a two-year struggle with Colon Cancer. She leaves behind 4 daughters, 2 sons, 5 granddaughters (2 adopted), 4 grandsons, and 2 great grandchildren. Margaret’s voice was beautiful to hear, a gentle brogue from Scotland’s Clyde valley. She was born in Lanark Scotland on Jan. 12th , 1935. Her younger years were spent surviving the War, acquiring her scholastic Level 1 diploma while participating in track and field, then establishing her career in British Telecom as a phone operator. She met Bill Rae at the “Palli” in Motherwell; they both were avid dancers, partnering with grace and beauty. Bill and Margaret married in 1962 and had Anthony in 62 while living in England; Pauline was born in 1963 while living in Motherwell Scotland; Henry was born in 1964 while living in Montreal Canada; Fiona in 1970 and Theresa in 1972 while living in Dallas TX. Bill and Margaret continued their nomadic ways, moving to Hudson, NH in 1976 and attending St. John’s parish for the following 8 years. Margaret donated many hours to the Catholic Church, teaching Hudson’s children in preparation for their first communions. In 1984, Bill and Margaret moved to Lansdale PA, moving on to Huntsville, AL in 1986 where Bill passed away in 2001. Margaret maintained the household and the children thru all of those moves/years. She entered the workforce a second time in 1976, working with children. In 1987, Margaret adopted a beautiful granddaughter while taking care of children in her home. Melissa LeVan and her sister Jennifer became beloved members of Margaret’s family due her willingness to provide flexible childcare to their mother and two other working mothers. Margaret gave many people time, time that she used to listen, very rarely wasting any time on expressing her own concerns of the moment. She had the power to provide stability in a chaotic environment. She will be missed.

Margaret Mary Agnes Rae passed away Thursday May 3rd , 2018, joining her husband of 39 years, William Rae and her son, Henry Rae. Margaret passed to a peaceful rest surrounded by two generations of loving daughters and sons after a two-year... View Obituary & Service Information

The family of Margaret Rae created this Life Tributes page to make it easy to share your memories.