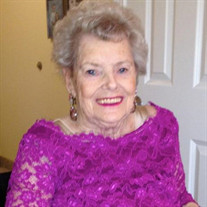 Margaret “Marnie” (Devaney) Farley, 85, of Nashua, NH, and formerly of Chelmsford, MA and Watertown, MA, died peacefully on March 1, 2017 in Nashua, following a lengthy illness. She was born March 15, 1931 in Boston, MA, daughter of the late Thomas W. and Helen (Harris) Devaney. She was also predeceased by a daughter, Alyson Morrison, in 2005. Marnie was the loving wife of Arthur W. Farley, Jr. of Nashua, with whom she shared 61 years of marriage. She was the treasured mother of Arthur W. Farley III of Merrimack, NH and Melinda Wood of Lexington, MA, the beloved Nana of Matthew Morrison, Patrick Morrison, Christopher Farley, and Paige Farley, as well as dear great grandmother. Visiting hours will be held on Monday, March 6th from 10am - 12 Noon, with a Service of Remembrance beginning at Noon in the DUMONT-SULLIVAN FUNERAL HOME, 50 FERRY ST., IN HUDSON, NH. Burial will be private.

The family of Margaret "Marnie" Farley created this Life Tributes page to make it easy to share your memories.