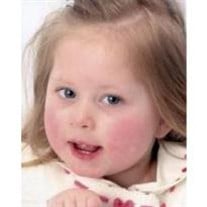 Madelyn Frances Sullivan was born November 20, 2005 and passed away suddenly Wednesday December 31, 2008 at her home. She is the beloved daughter of Eric and Rachael (Barnard) Sullivan of Temple, NH. After a courageous battle and surviving meningitis, Madelyn left us. In her three years of life on this earth, she fought harder and went through more than most do in an entire lifetime. Madelyn’s nurse, Jennifer Adams, loved and cared for her during the day and helped Madelyn reach many milestones, including starting pre-school last Fall. Though Madelyn’s life was cut short, her light shone brightly. Her bright spirit never failed to reach out and touch those around her. Madelyn will always live on in the hearts that knew and loved her. Besides her loving parents; Eric and Rachael, Madelyn leaves behind her older sister; Rosalyn, who acted like her second nurse and always sang to her, read to her, and loved her with all her heart. She also leaves behind her little brother; Mason, whose company Madelyn enjoyed so very much. Maternal grandparents are Marsha Barnard of Peterborough and Ray Barnard of Nashua. Paternal grandfather is Sean Sullivan of Milford and Madelyn was predeceased by her grandmother, Barbara Sullivan. Madelyn also leaves behind four uncles; Ray Barnard, Ryan Barnard, Robert Barnard, and Corey Sullivan, all of Nashua. An Aunt, Ashley Sullivan of Hancock, NH. She also leaves behind her great grandparents; Beverly and Dick MacKay of Nashua. Edith Schneider of Monroe, NJ. Raymond and Helen Barnard of Hamilton Square, NJ. As well as many aunts, uncles, and cousins. We all love and will remember Madelyn with all our hearts. A Funeral Mass will be celebrated on Mon., Jan. 5th at 10am in St. Christopher’s Church, 62 Manchester St. in Nashua. All May Meet At Church. Burial will be Private.

Madelyn Frances Sullivan was born November 20, 2005 and passed away suddenly Wednesday December 31, 2008 at her home. She is the beloved daughter of Eric and Rachael (Barnard) Sullivan of Temple, NH. After a courageous battle and surviving... View Obituary & Service Information

The family of Madelyn Frances Sullivan created this Life Tributes page to make it easy to share your memories.