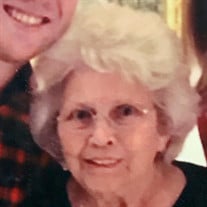 Louise Anita (Clark) Leary, 88, died peacefully on Sunday, January 7, 2018 at Southern New Hampshire Health surrounded by loving family members. Louise was the loving wife of the late Arthur V. Leary, Jr. who predeceased her on December 14, 1988. Louise was born in New Bedford, MA on February 25, 1929 and was the daughter of the late Anita (Bly) Clark Trznadel and Bernard Clark. She is survived by her children, Kathy Leary and her husband Urs F. Nager, Jr. of Hudson, NH, Michael Leary and his wife Karyl of Venice, FL and Paul Leary and his wife Dorothy of Brookfield, CT, her grandchildren, Susan Leary and her husband, Sean Kilpatrick, Tara Nager, Sean Leary, Patrick Nager, and Kevin Leary, as well as her sister-in-law, Marcia Perez, cousin, Lucy Bly, and nephews, Stephen Perez and John Perez. She was predeceased by many other family members and friends. Louise and Art cherished their 39 years of marriage living in New Bedford, Medford, and Boston, MA as well as New Haven and Fairfield, CT before retiring to So. Yarmouth, MA in 1988. During their years in Medford, they met life-long friends who were all WWII vets, and their spouses, attending Tufts University and living in Tufts’ married students housing at Sterns Village. She worked at various administrative and secretarial positions throughout her life. Louise was an avid cheerleader and spectator at her children’s and grandchildren’s sports and other events. While living on Cape Cod, she and Art loved spending time at the beach and visiting friends and family. She moved to Hudson, NH in 2005 to live with her daughter. Louise cherished spending time with family. She was a loving mother, grandmother, mother-in-law, aunt, sister-in-law, and friend, and will be greatly missed. A Mass of Christian Burial will be celebrated in her memory on Saturday, January 20, 2018 at 10:30 AM at St. Kathryn’s Church at 4 Dracut Road, Hudson, NH. Internment will be at a later date. In lieu of flowers, donations may be made in her memory to St. Jude’s Children’s Hospital, 262 Danny Thomas PL, Memphis, TN 38105 or www.stjude.org.

The family of Louise A. Leary created this Life Tributes page to make it easy to share your memories.