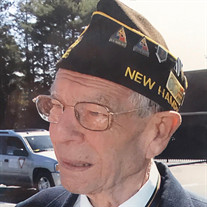 Louis Joseph Prince, 98, of Nashua, NH passed away on May 26, 2018 peacefully at Langdon Place, in Nashua, NH with his family by his side. Louis was born in Trois Rivieres, Canada on March 6, 1920 son of the late Eugene and Delima (Bernaguez) Prince and was the eldest of 14 children. Louis was Pre deceased by the Love of his Life, his wife Lucille Roussel as well as two sisters, Gabrielle Kinney and Carmel Christie; two brothers, Marcel and Albert Prince. Louis attended St. Francis Xavier School and Nashua High until he was called to serve his country in war. He was gone four years and was highly decorated including: The Good Conduct Medal, WWII Victory Medal, Bronze Star, Grand Cross of Homage (Battle of the Bulge), French Croix De Guerre with Palm, Meritorious Service Unit Award, European Theater of Operations Ribbons with Nine Battle Stars and three arrowheads. Louis bowled on the Impco Bowling League and enjoyed watching sports and visiting with his family. He was a lifetime active member of the VFW Post 483 and American Legion Post 48. He participated in many Memorial Day & Veteran parades and was had been Grand Marshal. He marched in parades until he was 94 years old and participated in parades up until 2017 without missing even one. Louis worked over 30 years at Impco as Head Mechanic in charge of the company garage following his retirement, he then worked for Leo Dumont and the Dumont-Sullivan Funeral Home for more than twenty years. He attended Infant Jesus Church where he was a money collector. He is survived by three sons, Roger, Richard and wife Marie and David and wife Cynthia; a Daughter, Diane and husband Arthur Brunelle; nine grandchildren; nine great-grandchildren; many nieces and nephews; five Brothers: Paul and wife Helen, Peter and wife Carol, Robert, Maurice and wife Patsie and George; four sisters Pauline Lamothe, Joan Dobens, Cecile Lane and Jaqueline and Husband Louis Faucher and three sister-in-laws, Germaine Michaud, Bibiane Gagne and Constance Michaud and husband Henry. Visiting Hours will be held on Thursday May 31st from 4-7pm in the Dumont-Sullivan Funeral Home, 50 Ferry St., Hudson, NH. A Funeral Mass will be celebrated the following morning at 10am in St. John XXIII Parish at Infant Jesus Church, 121 Allds St., Nashua, NH. Burial will take place immediately following in St. Francis Cemetery, Nashua. In lieu of flowers, please send donations to the American Legion #48, 2 Fulton St, Hudson, NH 03051.

Louis Joseph Prince, 98, of Nashua, NH passed away on May 26, 2018 peacefully at Langdon Place, in Nashua, NH with his family by his side. Louis was born in Trois Rivieres, Canada on March 6, 1920 son of the late Eugene and Delima (Bernaguez)... View Obituary & Service Information

The family of Louis J. Prince created this Life Tributes page to make it easy to share your memories.