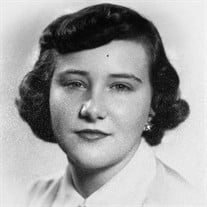 Lorraine Beatrice (Cloutier) Cloutier age 85 of Nashua, N.H., wife of Kenneth E. Cloutier was called to heaven after a lengthy illness on December 13, 2018. Lorraine was born in Nashua, N.H. on October 24, 1933, daughter of the late Joseph and Ella (Levesque) Cloutier. After vacationing for many years in Florida, Lorraine and Ken made there home in Palmetto Florida until recently moving back to Nashua, N.H. Most of their N.H. time was spent in Nashua, Hudson and Epsom. Lorraine graduated as valedictorian from the 1952 class of Alvirne High School. Lorraine was employed by the Public Service Co. of N.H., the California Air National Guard and theState of N.H. Employment Security Office and later a licensed N.H. Real Estate Broker with Cloutier Brothers Reality. Lorraine enjoyed many hobbies including reading, sudoku, and many needlework projects. Members of her family include her husband of 64 years Ken, a son Michael Cloutier of Epping, N.H. a daughter and son-in-law Lisa and Clint Weaver of Hudson, N.H. Five grandchildren Heather Migneault and her husband Keith of Fort Worth, TX., James Weaver and his wife Nia, Patrick Weaver and his wife Amanda all of Hudson, N. H., Jessica Weaver and her significant other Nick Enquist of Manchester, Shawn Hysetteand his significant other Erin Mcdonah of Danville, NH., 11great grandchildren. Lorraine’s siblings include Robert Cloutier (deceased) and his wife Patricia of Peterborough, N. H., Richard Cloutier (deceased) and his wife Micheline of Gerardmer, France, and a sister Jacqueline and her husband NormandLaplante of Nashua, N. H., as well as several nieces, nephews and cousins. In Lieu of flowers the family has requested that donations be made to Home Health and Hospice Care at 7 Executive Drive, Merrimack, N. H. 03054.

Lorraine Beatrice (Cloutier) Cloutier age 85 of Nashua, N.H., wife of Kenneth E. Cloutier was called to heaven after a lengthy illness on December 13, 2018. Lorraine was born in Nashua, N.H. on October 24, 1933, daughter of the late Joseph... View Obituary & Service Information

The family of Lorraine Cloutier created this Life Tributes page to make it easy to share your memories.