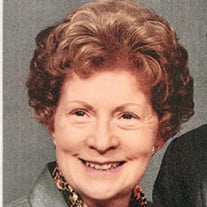 Loretta Molloy Coffey age 93 of Nashua, died peacefully on Thursday, June 16, 2022, due to declining health. A lifelong resident of Nashua, she was born on August 10, 1928, the daughter of the last John W. Molloy and Loretta (Birchall) Molloy. She was the beloved wife of the late Conrad J. Coffey. Loretta was also predeceased by her grandsons, Jordan Coffey and Tyler J. Coffey. Loretta graduated from Nashua Senior High School in 1946 and was a 1950 graduate of Mt. St. Mary College where she earned a Bachelor of Science degree, followed by post-graduate work at Fitchburg State. Loretta worked as a teacher in the Hudson School District and as a substitute teacher in the Nashua School District.  Loretta also worked at Coffey Insurance Agency for many years. Loretta is a former member of the Nashua Country Club, participated in the RISE Program at Rivier University, and was a communicant of the Parish of the Resurrection where she had taught CCD. Loretta enjoyed many summers at her beach house in York Beach. Loretta was the devoted mother of Sharon Coffey of Nashua, Jay Coffey and daughter-in-law Laurie R. Coffey of Nashua, and David and daughter-in-law Sharon Coffey of Brookline. She was the cherished grandmother of Kaitlyn M. Coffey and spouse Brian Wilkins of Rye, Amanda Finigan and spouse Mick of Brookline, Courtney E. Coffey and spouse Andrew Gould of Rye, Nicholas JH Coffey and significant other, Molly Hemond of Nashua, Hannah R. Coffey of Nashua, Devon Coffey and spouse Katelyn of Hooksett, and Kateri G. Coffey of Nashua. Loving great grandmother of Callahan Gould of Rye, and Lillian Wilkins of Rye. As well as close family friend, Cheryl A. Smith of Nashua. A time of visitation will be held on Monday, June 27th from 9:30m -10:30am in the Parish of the Resurrection, 449 Broad St., in Nashua. A Mass of Christian Burial will follow at 11:00am with interment in St. Patrick Cemetery in Hudson.

Loretta Molloy Coffey age 93 of Nashua, died peacefully on Thursday, June 16, 2022, due to declining health. A lifelong resident of Nashua, she was born on August 10, 1928, the daughter of the last John W. Molloy and Loretta (Birchall) Molloy.... View Obituary & Service Information

The family of Loretta Coffey created this Life Tributes page to make it easy to share your memories.