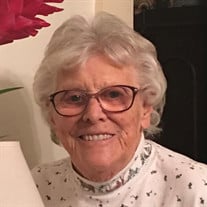 Loraine passed away in her home, as was her wish, thanks to the loving care of her daughter Terry and two granddaughters Ryan and Kelsey. She was born in Tunbridge, Vermont to Eleanor and Howard (Pete) Fisk. She was the third of six children who attend #3 School in Tunbridge and went on to graduate from South Royalton High School in 1947. She married Donald R. Battey from Chelsea, Vermont on Valentine’s Day in 1952. They resided briefly in Colorado, California, Illinois and Rhode Island before settling in NH and raising their two daughters, Theresa (Terry) Douville and Nancy Battey. She was proud of completing her certification from UNH in “Reading & Evaluating Children’s Books” in 1974. She was well known in Hudson, as she worked as the children’s librarian at Hills Memorial Library then worked for 21 years with the Hudson School District, as the H.O. Smith and Library Street librarian before retiring. She was a member of the Nashua Garden Club, the Nashua Senior Center and Hudson Senior Center. Loraine volunteered for over 15 years at the Southern NH Medical Center, and also volunteered at the Nashua Soup Kitchen. She loved dancing, including line dancing & clogging. As most that knew her were aware, Loraine loved flowers, gardening, the outdoors, walking in New England woods and deeply loved her family. Loraine was predeceased by her parents, as well as husband, and siblings Leona Jackson, Lillian McAllister, Clayton (Sam) Fisk, and Marie Hemenway. She is survived by her daughters Theresa Douville of Hooksett, NH, and Nancy Battey and husband Rob Ingle of Louisville, CO, granddaughters Ryan Godbout and husband Nicholas of Hooksett, NH and Kelsey Douville of Hooksett, NH, great-grandson Johnny Godbout and brother, Rodney Fisk and wife Mary of Tunbridge, VT as well as many nieces, nephews and their children. Her legacy lives on in her granddaughters’ love of flowers and reading, her daughters’ dedication and love of family, as well as their collective love of the outdoors and of Loraine’s childhood home in Tunbridge. Per her wishes no services will be held. A graveside burial and gathering for family will be scheduled when the grass is green, sun is shining and flowers blooming at the Spring Road Cemetery in Tunbridge, Vermont. In lieu of flowers, the family asks that donations be made to either the Juvenile Diabetes Research Fund (JDRF)at www.jdrf.org or the American Cancer Society at www.cancer.org

Loraine passed away in her home, as was her wish, thanks to the loving care of her daughter Terry and two granddaughters Ryan and Kelsey. She was born in Tunbridge, Vermont to Eleanor and Howard (Pete) Fisk. She was the third of six children... View Obituary & Service Information

The family of Loraine Battey created this Life Tributes page to make it easy to share your memories.

Loraine passed away in her home, as was her wish, thanks to the...