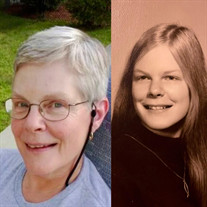 Lois Anne (MacMillan) Stinehelfer, known as “Cookie” by her friends and family, passed away on Saturday, May 21, 2022 in Nashua, NH after fighting a courageous battle with melanoma.  She was born on July 11, 1952 in Nyack, NY, daughter of the late John Buchanan MacMillan & Jane Mortenson MacMillan. Lois was the beloved wife of Harold Eugene Stinehelfer, Jr. of Nashua, whom she married on August 8, 1976 at United Presbyterian Church in Cambridge, MA. She graduated from Nyack High School in Nyack, NY, Class of 1970 and later received a Bachelors of Arts in Foreign Language with a Major in German from Moravian College in Bethlehem, PA, Class of 1974 Lois ran her own home daycare for 8 years as well as being the “neighborhood mom“, having a revolving front door of children running through her home. She then became a nursing assistant (LNA) and spent over 20 years of her career caring for patients and elderly between Carlton Willard Nursing Home in Bedford, MA and Winchester Hospital in Woburn, MA. She was an avid Peanuts fan and was always in love with Snoopy, Woodstock and Schroeder. She loved dogs (preferably puppies) and also loved the Boston Red Sox and Chicago Cubs. Baseball was her favorite TV past time and she was ecstatic when her youngest daughter, Ellen, decided to play softball because it gave her more games to watch. In her younger years she took a fascination to the German culture and spent a year abroad as part of her college studies. She grew up in a musical family and played the flute for many years. She was never short of words or sayings that she loved to put to music, and had her own daily jingles like “Hooray for Little Punkins” and “I have a bad doggie”. Her quiet and passive-aggressive nature was part of her charm, and we never failed to sit and laugh for hours when we were together. She was one who never failed to embarrass her children in public, and love her family through the hardest of times. She was a lady who never made empty promises and her children knew it. She loved God whole-heartedly and spend much of her time in ministry service at New Colony Baptist Church in Billerica, MA and New Life Christian Church in Hudson, NH.  Harold and Lois were married for 45 adventurous years. There were very few things they did not do together. Later in life they had the freedom to do a little traveling and hiking which was cut short when she fell ill. They both fulfilled the promise “Til Death do Us Part” and they shall be reunited again in eternity one day. Besides her devoted husband, Harold, she is survived by her loving family which includes her children:  Esther and Steve Maturo, Eric and Melissa Stinehelfer, Ellen and Gary Delaney, and Ethan Stinehelfer plus six grandchildren; Kaleb Stinehelfer, Jessica Maturo, Allison Maturo, Cadence Delaney, Nora Stinehelfer, Paisley Delaney and one bonus great-granddaughter Lilah Holmes who were the light of her life!  Her siblings include Alan & Constance MacMillan and Janet & John Fitchuk, with nieces and nephews; Greta MacMillan, Emily MacMillan, Ian & Megan Fitchuk and Kevin Fitchuk as well as many friends. A memorial service will be held at New Life Christian Church, 272 Lowell Road Hudson, NH 03051 on June 10, 2022 @ 5:00 pm. Reception to follow.  We ask that in honor of Lois, people where Redsox, Cubs or Peanuts attire if they so choose.

The family of Lois MacMillan Stinehelfer created this Life Tributes page to make it easy to share your memories.

Lois Anne (MacMillan) Stinehelfer, known as “Cookie” by her friends...