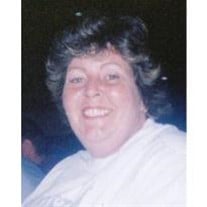 Lisa Ann Maille-Hume, 51, of Nashua, NH passed away peacefully at St. Joseph’s Hospital surrounded by her family on March 20, 2012. She was the wife of Scott Hume. She was born January 17, 1961 in Lowell, MA, daughter of Cecilia (McLarnon) Maille of Nashua and the late Maurice Maille. Lisa was the third oldest of nine children and attended St. Joseph’s elementary and high school. She graduated from Daniel Webster College with a Bachelor’s degree in Business. She was a dedicated civil servant for the Department of Defense, USAF for the past 34 years as a Contracting Officer at Hanscom Air Force Base in Bedford, MA. In her early years, Lisa satisfied her competitive nature by playing for the Hanscom traveling softball team. She competed and was involved in horseshoe pitching at the Dracut Civic Club and Nashua courts, ultimately becoming a state champion and competing in world tournaments. Other activities that she enjoyed included traveling, gardening, yard sales, and spending time with her family. She enjoyed quilting, which was introduced to her by her mother-in-law Dixie Hume. She was an avid fan and supporter of #14 of the University of Maine baseball team. In addition to her father, she was predeceased by her brother-in-laws Arthur Bazdanes and Dennis Silverthorn, nephew Robby Maille, and father-in-law Charlie Hume. Besides her husband and mother, she is survived by her siblings: Sue Silverthorn, Polly Bazdanes (with whom she resided), Steve Maille, Michael and Janet Maille, Rob and Robin Maille, Ellen and Doug Soper, Kevin Maille, Jason and Kim Maille. Also, in addition to her mother-in-law, she is survived by Lisa and Chris MacIntyre of Jacksonville FL and Nancy and Mike Hernandez of Loxahatchee FL. Lisa will be truly missed by her two lap companions, Barnum and Bailey. “Auntie Lisa” was truly loved by her nieces and nephews. She will always be remembered lovingly as a wife, sister, aunt, godmother, friend and mentor. Visiting Hours will be held on Friday, March 23rd from 2pm-5pm in THE DUMONT-SULLIVAN FUNERAL HOME, 50 FERRY ST. HUDSON. Burial will be held at a later date.

Lisa Ann Maille-Hume, 51, of Nashua, NH passed away peacefully at St. Joseph’s Hospital surrounded by her family on March 20, 2012. She was the wife of Scott Hume. She was born January 17, 1961 in Lowell, MA, daughter of Cecilia (McLarnon)... View Obituary & Service Information

The family of Lisa Ann Maille-Hume created this Life Tributes page to make it easy to share your memories.