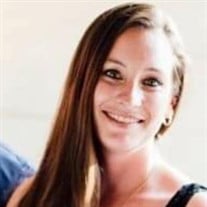 Lindsey Kasandra Lavoie, beloved daughter of Debbie and Thomas Lavoie, gained her wings on October 29, 2021. Such a beautiful soul that should not have left this earth at such a young age. Lindsey was born on March 27, 1988, in Nashua, NH. She attended Nashua High School North, then furthered her education at Hesser College graduating with an Associate Degree. After college, Lindsey became an essential and devoted employee at Paychex for 10 years. Lindsey had the most beautiful smile that would light up any room. Her laugh was contagious and if you were lucky enough to meet her, you would know how genuine and caring Lindsey was. She loved her family endlessly especially her older brother Nick who she absolutely adored, and Aunt Becky who she had such a close relationship with that Becky was more like a sister. The three of them when together were pure happiness to watch. Lindsey’s nieces and nephew were her pride and joy. She just radiated with love when around “Aunties babies” as she would like to call them. Kind, thoughtful, loyal, smart, beautiful inside and out, putting others first and full of charm. She had it all but remained extremely humble in her short life. Lindsey made a positive impact on so many lives and will be missed by all. Lindsey would like all her friends to know how much she loved and cherished them. There were a few that were extra special to her, and you know who you are. Lindsey was predeceased by her Maternal Grandparents, Raymond C. McLaughlin, and Sandra (Howard) Gordon and her Paternal Grandfather (Pépère) Normand R. Lavoie. Lindsey is survived by her Parents, Thomas M. Lavoie, and Deborah A. (McLaughlin) Lavoie, her brother, Nicholas M. Lavoie, and his wife Kristen (Riley) Lavoie and their children (Aunties Babies) Rilynn, Declan and (tiger Lilli) Lilianna along with her Aunt Ms. Rebecca Gordon (aka Becky G or Aunty GAB). She is also survived by her Paternal Grandmother (Mémère) Mrs. Ida B. Lavoie. Family members include the following Uncle’s and Aunt’s; Mr. William N. Lavoie and wife Karen, David Lavoie and wife Darlene, Marc Lavoie and wife Maureen, Denis Lavoie, and wife Carol, Raymond “Bubba” McLaughlin and wife Beth, Lance McLaughlin, and wife Meghan. Lindsey’s cousins include Justin, Meghan, Ashley, Brian and Emily, Jonathan, Abigail, Nathalie, Mitchell, Sam Lavoie, Chuck, Amanda, Tyler, and Alexander McLaughlin. Following cremation, visiting hours will be held on Thursday, November 11th from 4pm - 7pm in the Dumont-Sullivan Funeral Home, 50 Ferry St. in Hudson. A Funeral Mass will be celebrated on Friday, November 12th at 10am in St. Joseph the Worker Parish, 777 West Hollis St., in Nashua. All may please meet at church. Burial will be private. In lieu of flowers, we ask that donations be made to your local Domestic Violence charity along with Violence Against Women charities in Lindsey’s name,. Examples of these are Bridges at www.bridgesnh.org or the NH Coalition Against Domestic & Sexual Violence at www.nhcadsv.org

Lindsey Kasandra Lavoie, beloved daughter of Debbie and Thomas Lavoie, gained her wings on October 29, 2021. Such a beautiful soul that should not have left this earth at such a young age. Lindsey was born on March 27, 1988, in Nashua, NH.... View Obituary & Service Information

The family of Lindsey Lavoie created this Life Tributes page to make it easy to share your memories.