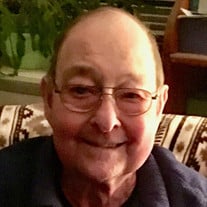 Lewis F. Trowbridge, 78, of Hudson, died Monday, February 20, 2017 at the Community Hospice House in Merrimack, NH. He was born December 30, 1938 in Wallace, Idaho, son of the late Leo and Dorothy (Whiting) Trowbridge. Lewis was the husband of Sandra (Cummings) Trowbridge of Hudson, with whom he shared 56 years of marriage. Lewis served his country honorably, having retired from the US Air Force after serving 21 years, many of which were with Explosive Ordnance Disposal (EOD). He was later employed as a government contractor, traveling all over the United States and several times to the Middle East. Lewis was an avid fly fisherman who also enjoyed woodworking, listening to music, reading and working on antique firearms. He loved spending time with his family and will be greatly missed by all who knew him. Besides his loving wife, Sandra, survivors include two sons, Eric Trowbridge and his wife, Tamra, of Florida, Glenn Trowbridge and his wife, Sandra, of Hudson, two daughters, Erin Trowbridge of Virginia, Tracy Lavalliere and her husband, John, of Merrimack, NH, five grandchildren, Steven, Elizabeth, Victoria, Nicholas, and John, Jr., a sister, Shirley Chandler of Michigan, as well as several nieces, nephews, and cousins. Visiting hours will be held on Sunday, February 26th from 1pm - 4pm in the DUMONT-SULLIVAN FUNERAL HOME, 50 FERRY ST. IN HUDSON. Burial will take place in the NH State Veteran Cemetery, 110 Daniel Webster Hwy, in Boscawen, NH, with a service taking place in the cemetery chapel at 12:30pm on Monday, February 27th. All may meet at the cemetery chapel. In lieu of flowers, the family requests donations be made in Lewis’s loving memory to Home, Health, & Hospice Care, Attn: Hospice House, 7 Executive Park Dr., Merrimack, NH 03054.

Lewis F. Trowbridge, 78, of Hudson, died Monday, February 20, 2017 at the Community Hospice House in Merrimack, NH. He was born December 30, 1938 in Wallace, Idaho, son of the late Leo and Dorothy (Whiting) Trowbridge. Lewis was the husband... View Obituary & Service Information

The family of Lewis Trowbridge created this Life Tributes page to make it easy to share your memories.