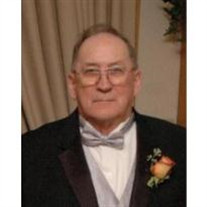 Lester Allen Messer, 78 of Hollis, NH died January 1, 2012 at St. Joseph Hospital in Nashua, NH following a lengthy illness. He was born February 13, 1933 in Harvey Station, New Brunswick, Canada son of the late Ezra and Vera (Noble) Messer. He was also predeceased by a granddaughter Carrie Livermore, three brothers Darryl Messer, Gerald Messer, Ronald Messer, and a sister Nellie Currie. Lester was the husband of Eleanor (Tracy) Messer of Hollis with whom he shared 56 years of marriage. He was employed for 25 years as a truck driver with Allied Trucking and prior to that was a Tree Surgeon in Massachusetts. Lester was an avid fisherman who loved the outdoors and animals. He always held dear the times he and his family spent at their camp in Canada. Besides his loving wife Eleanor, survivors include a son Calvin Messer and his wife Kathryn of Litchfield, NH, two daughters Cheryl Livermore of Derry, NH, Connie Messer of Hollis, NH, two brothers Cyril Messer and his wife Marilyn and Byron Messer all of Florida, five grandchildren Christopher Livermore, Jamie Gagnon and her husband Jeff, Courtney Livermore, Kyle Messer, Brienna Talbot and her husband Jared, two great grandchildren Tyler and Kaedence, two sisters in law Marjorie Messer and Betty Messer both of New Brunswick, Canada, as well as many dear nieces, nephews, and friends. Visiting Hours will be on Wednesday January 4th from 5pm-8pm in THE DUMONT-SULLIVAN FUNERAL HOME 50 FERRY ST. IN HUDSON. A Funeral Service will take place on Thursday at 10am in Faith Worship Center, 2 Lomar Park, Pepperell, MA. ALL MAY MEET AT CHURCH. Following cremation, burial will be private. In lieu of flowers the family requests donations be made in Lester’s loving memory to the American Cancer Society, 2 Commerce Dr., Suite 110, Bedford, NH 03110.

The family of Lester A. Messer created this Life Tributes page to make it easy to share your memories.