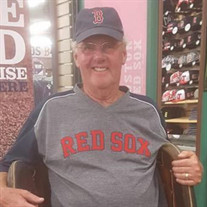 Lester E. Johnson, age 75, of Merrimack, NH passed away on December 6, 2020 at the Community Hospice House in Merrimack, NH, after a short battle with cancer. He was born on December 16, 1944 in Lowell, MA to the late Edwin and Alice (Johnson) Johnson. Lester was raised in Billerica, Massachusetts where he was a member of the Demolay Boys Club. In 1962, he graduated from Billerica High School with varsity letters in football, basketball, and baseball. After graduation, Lester enlisted in the United States Air Force as an aircraft mechanic. He was honorably discharged after a tour in Vietnam. Lester started working at a gas station at the age of 14 which led him into his career in the auto industry. He was well-known in southern New Hampshire for the successful used car business, Jok’s, which he built from the ground up and for his active community engagement. From selling cars to talking sports, you could always hear his boisterous voice and hearty laugh throughout Hudson, NH. Lester was an avid Boston sports fan and when he wasn’t rooting on his Boston teams, he was playing softball. Most importantly, Lester, or “grampy” as he was most often called, was a well-loved grandfather. He loved playing monopoly, attending his grandchildren's sporting and school events, and just goofing around with his grand- and great-grandchildren. Lester will always be remembered for his work ethic, integrity, and joyful spirit. He was married to his high school sweetheart, Jolean (DePasquale) Johnson for 30 years. Besides his loving wife, Lester is survived by his 5 children, Kristan Leggett and her husband Keith of Odessa, Florida, Erika Michael and her husband Rob of Tampa, Florida, Jodi Waddell and her wife Jasmine of Chelmsford, MA, Darlene Brown and her husband Ray of Amherst, NH and William Sylvester and his wife Katrina of Pepperell, MA. He also leaves behind 14 grandchildren and 6 great-grandchildren. Along with countless colleagues, friends and extended family, Lester leaves behind his life-long friends, Fred and Cindy Martell of Goffstown, NH. A celebration of life event will be announced at a later date.

Lester E. Johnson, age 75, of Merrimack, NH passed away on December 6, 2020 at the Community Hospice House in Merrimack, NH, after a short battle with cancer. He was born on December 16, 1944 in Lowell, MA to the late Edwin and Alice (Johnson)... View Obituary & Service Information

The family of Lester Johnson created this Life Tributes page to make it easy to share your memories.