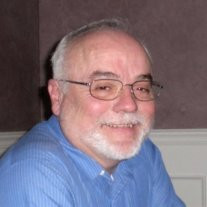 Leonard L. “Lenny” Marchand, 65 of Londonderry and formerly of Hudson, died unexpectedly on Tuesday, December 24, 2013 at Parkland Medical Center in Derry. He was born June 12, 1948 in Medford, MA, son of the late Leonard A. and Madeline (Aarron) Marchand. Lenny was the husband of Jeannie (Dillon) Marchand of Londonderry. He was employed with Ferrotec in Bedford, NH for 15 years. He was an avid outdoorsman who loved fishing and hunting. Lenny was considered a “breakfast connoisseur” who took great pride in the personal upkeep of his vehicles. His greatest joy was found when spending time with his three grandchildren. Besides his loving wife Jeannie, survivors include two daughters and two sons in law; Tracy and Troy Mifsud of Londonderry, Kim and Stephen Puopolo of Hudson, three grandchildren; Eric Mifsud and Adam Mifsud both of Londonderry and Lauren Puopolo of Hudson, a sister; Elaine Mann and her husband Charles of Winthrop, ME, as well as several nieces, nephews, cousins, and dear friends. Visiting Hours will be held on Sunday, December 29th from noon-3pm, with a Prayer Service at 3pm in the DUMONT-SULLIVAN FUNERAL HOME, 50 FERRY ST. IN HUDSON. Following cremation, burial will be held at a later date. In lieu of flowers the family encourages donations be made in Lenny’s loving memory to the Arthritis Foundation, PO Box 96280, Washington, DC 20077.

The family of Leonard "Lenny" Marchand created this Life Tributes page to make it easy to share your memories.

Leonard L. “Lenny” Marchand, 65 of Londonderry and formerly of...