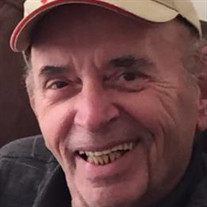 Lawrence Ignatius Palumbo, 78, of Nashua, NH died September 4, 2017. Lawrence was born on September 26, 1938 in Chelsea, MA son of the late Joseph and Mary (King) Palumbo and was the loving husband of Suzanne H. O’Malley. Lawrence was an active participant at Immaculate Conception Parish in Nashua, NH as well as the Crystal Community Club in Wakefield, MA Lawrence loved horse racing including and took numerous yearly visits to Saratoga Springs, NY; he loved gambling including yearly visits to Las Vegas, NV and Foxwoods in CT. Lawrence was extremely passionate about the food industry including produce which he was a business owner (Palumbo Produce) and produce specialist his entire life, mainly at Katsiroubas Produce in Hyde Park, MA where he worked for over 20 years. Larry was one of a kind and always ready with a good story. He enjoyed watching his children grow and recently his grand children. Larry loved sports, mainly baseball and football and was a Red Sox and Giants fan. He was a music lover and was known for blaring Frank Sinatra throughout town. He wanted everyone to know that he and Sue had a good run…. Besides his loving wife Sue, Lawrence is survived by three children, Terri Davis and husband Tracy, Lawrence A. Palumbo and significant other Jessica Garant, Joseph R. Palumbo; a step-son, Michael O’Malley and his wife Elizabeth; two grandchildren, Vito Palumbo and Ryon O’Malley; three sisters, Sheila Cusick, Claire Campanella and husband Vinnie and Carol Caiani and husband Angelo and numerous nieces, nephews and dear friends. Visiting Hours will be held on Friday September 8th from 5-8pm in the DUMONT-SULLIVAN FUNERAL HOME, 50 Ferry St., Hudson, NH. A Funeral Mass will be celebrated the following morning at 10am in the Immaculate Conception Parish, 216 East Dunstable Rd., NH.

Lawrence Ignatius Palumbo, 78, of Nashua, NH died September 4, 2017. Lawrence was born on September 26, 1938 in Chelsea, MA son of the late Joseph and Mary (King) Palumbo and was the loving husband of Suzanne H. O&#8217;Malley. Lawrence was... View Obituary & Service Information

The family of Lawrence I. Palumbo created this Life Tributes page to make it easy to share your memories.