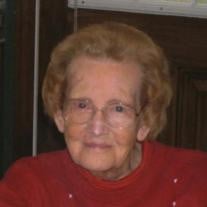 Lauretta (Hillsgrove) Douglass, 96, of Nashua died Sunday September 23, 2012 surrounded by her loving family. She was born April 14, 1916 in Pittsfield, NH daughter of the late Moses and Elizabeth (McCarthy) Hillsgrove. She was also predeceased by two brothers and two sisters. Lauretta was the loving wife of Willard Douglass, with whom she shared 66 years of marriage prior to his passing in December of 2005. Friends and family were everything to Lauretta. She was so giving of her time and love that she was cherished by everybody in her world. Few have earned the love and affection of all who were blessed to have known her. Survivors include a son Robert E. Douglass and his wife Marilyn of Franklin, NC two daughters Trudy Houle of Hollis and Colleen Dichard and her husband Steven of Nashua. Her eight grandchildren and their spouses; Wendy and Mike Swabowicz of Amherst, Shelly Johnson of Nashua, Paul and Sara Houle of Salisbury Center, NY, Julie and Scott Clough of Nashua, Jamison and Kristi Dichard of Santa Barbara, CA, Scott and Ruth Dichard of Merrimack, Robert E. and Heather Douglass of Palm Harbor, FL, Kim Tierney of Tampa, FL, as well as 15 great grandchildren and 2 great great grandchildren. The family would like to thank all the nurses, nurse aides, and cleaning staff of Greenbriar Health Care, Building #5-2, for all their kindness and wonderful care. Visiting Hours will be held on Wednesday September 26th from 4pm-7pm in THE DUMONT-SULLIVAN FUNERAL HOME, 50 FERRY ST. IN HUDSON. A Remembrance Service will be held on Thursday September 27th at 11am in the funeral home. Following cremation, burial will be private. In lieu of flowers the family encourages donations be made in Lauretta’s loving memory to UpReach Therapeutic Riding Center, PO Box 355, Goffstown, NH 03045.

The family of Lauretta Douglass created this Life Tributes page to make it easy to share your memories.